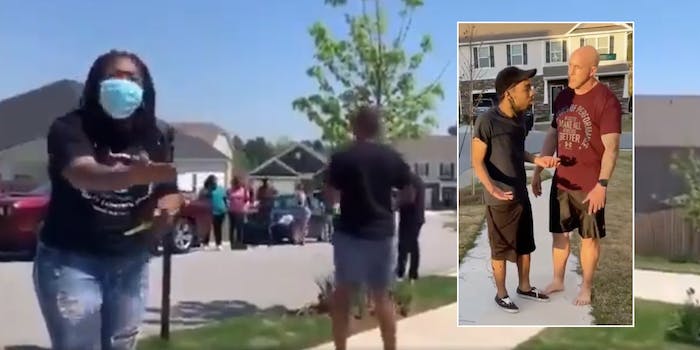 'Not in our community, will this ever happen.'

Demonstrators gathered in front of Army soldier Jonathan Pentland’s home on Wednesday to protest after a viral video circulating online showed him threatening and shoving a young Black man, who was walking in his Columbia, South Carolina neighborhood.

Dr. Sonya Lewis, the director of One Common Cause Initiative, said in a press conference in front of the Pentland home that citizens present were there “to serve notice on Columbia, its officials, or anyone else, who wants to…disrespect or disregard a person simply because of the color of his skin.”

While noting the power dynamics, people across social media who shared the video showing Pentland verbally abusing and assaulting the unnamed victim commented that the only thing the young man did wrong was be caught “walking while Black.”

“The kind of hate that our black skin attracts is absolutely ridiculous,” @kharyp tweeted. “There are so many # jonathanpentland’s in positions of power who abuse their authority and engage in white supremacy activities, just like this.”

According to WIS 10, Pentland was charged with third-degree assault and battery, per Richland County Sheriff Leon Lott, on Wednesday. Pentland is a sergeant first class stationed at Fort Jackson, approximately 10 miles east of Columbia.

Some weren’t pleased with the timelessness of Pentland’s arrest. @peprstrange tweeted, replying to Richland County Sheriff’s Office’s demand of dispersal from the area: “It’s a shame that it took a National campaign to get the Richland County PD to arrest a man for assault even after being shown a video of the assault. Shame on you. The protests and vandalism, that’s on you! Had you done the right thing, this would not have occurred!”