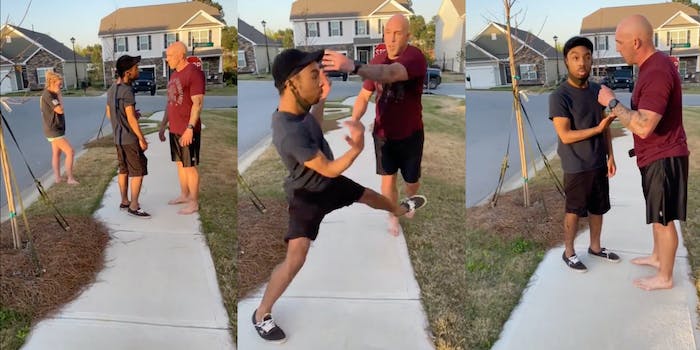 A new video shows a U.S. Army sergeant harassing and physically threatening a man who dared to walk while Black in their South Carolina neighborhood.

The aggressor in the video has been identified as 42-year-old Sergeant First Class Jonathan Pentland, who is based at Fort Jackson in Columbia, South Carolina. The two-and-a-half-minute video of the altercation went viral on Tuesday, prompting Twitter users to band together and demand Fort Jackson to take disciplinary action against Pentland.

The altercation between Pentland and the Black man—identified only as Deandre—is already underway when the two-and-a-half-minute clip begins. Deandre is walking down the sidewalk as Pentland demands that he “go away.” It is not clear why Pentland is acting so aggressively. Deandre remains calm throughout the video.

Pentland attempts to bully Deandre into leaving the area. Deandre tries to talk him down on multiple occasions, to no avail. When Deandre tells Pentland that he’s already become combative, the Army sergeant grows even more hostile.

“I didn’t hit you,” Pentland says, before admitting to putting hands on Deandre. He tries to defend himself by explaining the “difference between pushing you.” Pentland’s wife, Cassie, then cuts in and tells Deandre, “Pretty sure you were the aggressor, buddy.”

Pentland shoves Deandre again and screams that he’d “better walk away.” He then warns him, “You can walk away or I’m going to carry your ass out of here.”

Pentland’s aggression continues to mount throughout the video, climaxing with him telling Deandre, “You’re in the wrong neighborhood, motherfucker.”

When Deandre informs Pentland that he lives in the neighborhood, Pentland begins pressing him for his address. He then steps closer to Deandre and demands that Deandre “get the hell out of my face.”

The clip ends shortly thereafter, but the altercation is far from over. Details gradually emerged over the following hours, revealing that Pentland apparently slapped Deandre’s phone out of his hand at one point, cracking the screen. Police were eventually called, according to a Facebook post from a woman named Shirell Johnson, who received the video from the woman who filmed it, named Shadae.

Johnson said that despite multiple witnesses and video evidence of Pentland’s behavior, the officer told her “that he could only charge the white guy with malicious injury to property and not assault.”

Twitter user @Angry_Staffer shared the video yesterday, and it has since earned more than 1.3 million views on the platform. After users identified Pentland, the Fort Jackson Commanding General Twitter account responded to the video, writing, “This is by no means condoned by any service member. We will get to the bottom of this ASAP.”

The Daily Dot has reached out to Fort Jackson.

“Soldier conduct on and off duty must be exemplary to retain the trust of our communities and our nation,” said Fort Jackson Commander Brig. Gen. Milford Beagle, Jr., in a statement to the Daily Dot. “Fort Jackson continues to work with and support Sheriff Lott, our local law enforcement professionals, and community & civil leadership as this case moves forward.”

“This action deeply impacts our community—the neighbors in the
Summit, the city of Columbia, Richland & Lexington counties, and our Army
family,” Beagle added. “I ask that our communities and leaders exercise a
degree of patience, affording Sheriff Lott and law enforcement
investigators to account for the full measure of events before, during, and
after the incident that was recorded.”

The soldier in the video is stationed at Fort Jackson and Richland County
Sheriff’s Department have confirmed that he has been charged. The U.S.
Department of Justice is also looking into the incident.

Team Jackson and will work closely with each law enforcement agency as
investigations move forward. The command team, our Criminal Investigation Division (Army CID) agents, and our Staff Judge Advocate teams are all engaged with their professional counterparts and civil authorities to seek the facts which will determine how the investigations progress.

“I remain deeply concerned for the members of our Army family, the young man and his family, and the tensions that activities like this amplify over time; please be patient as facts are determined,” Beagle concluded.