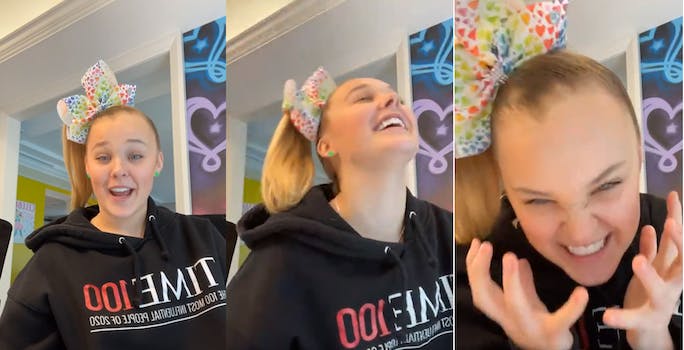 'OK!' is my new favorite clap back.

Recently out, children’s entertainer JoJo Siwa is clapping back at homophobic parents on Instagram, as she should!

In a recent Instagram post, the former Dance Moms star expressed gratitude for the support and acceptance she’s gotten since her initial “announcement” on Friday.

“I’ve been happy in this land for a minute now,” Siwa said in the post. “Now that I get to share that with the world…it’s awesome.”

Most of the comments were flooded with supportive fans and fellow celebs, like Kim Kardashian and Gigi Gorgeous, expressing their support for the 17-year-old.

However, not everyone was as thrilled about her coming out. One parent by the name @_keemaria, commented “My daughter will never watch you again,” under Siwa’s post.

Siwa, who’s known for her cheery persona, clapped-back with the most iconic PG-rated, “OK!”

Siwa’s announcement is big news as she’s one of today’s biggest children’s entertainers with over 12 million YouTube subscribers.

During her initial Instagram Live video, one user asked Siwa what her label was. She noted that she’s thought a lot about this, but isn’t quite sure herself.

“Right now, I’m super-duper happy,” she responded. “I wanna share everything with the world. I really, really do, but I also wanna keep things in my life private until they’re ready to be public.”

The most important thing, Siwa said, is that her viewers can know that loving who they love is OK and “awesome.”