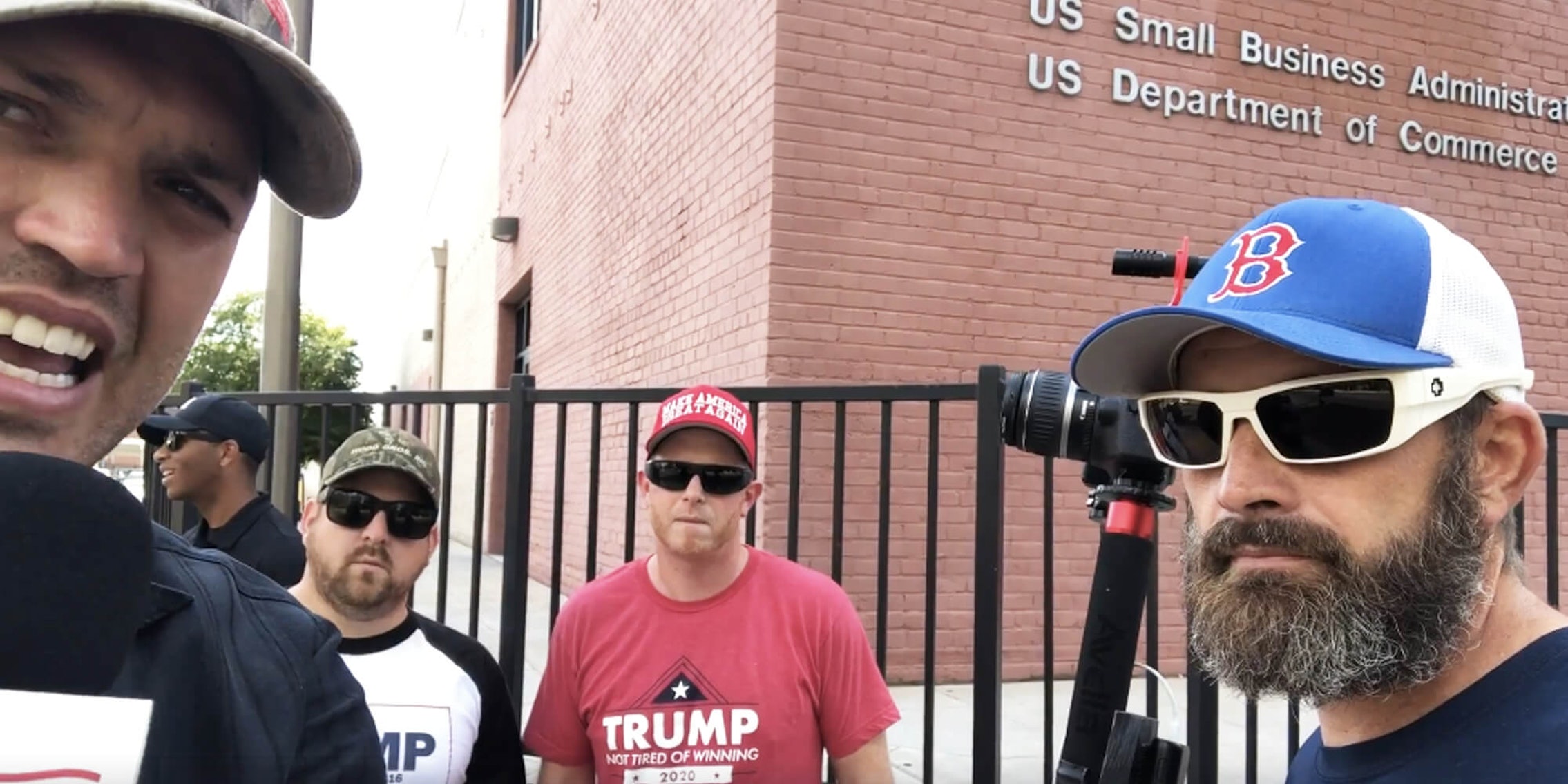 Miguel Arias says that he asked the men to leave his home, and that his children were inside sleeping.

A group of men associated with the Southern Poverty Law Center-identified hate group known as the Proud Boys showed up at the home of Fresno City Council President Miguel Arias on Tuesday afternoon, resulting in a scuffle that left both sides with conflicting reports.

The incident occurred just after 4pm, when the group of approximately 15 men—led by self-identified Proud Boy and Frontline America host Ben Bergquam—came to Arias’ home.

Bergquam later told ABC 30 Action News that they went “looking for answers” over the city remaining closed due to the coronavirus pandemic. Most of the men can be seen in video from before and during the confrontation wearing Trump or MAGA clothing and accessories.

In video footage that was taken by several group members, edited together, and posted to the Frontline America Facebook page, Bergquam can be seen knocking on the door to Arias’ condo while holding a microphone and camera.

Arias immediately asks him to leave and when Bergquam ignores the request, the city council president steps out and begins shoving him down the stairs, slapping a piece of equipment out of his hand.

“There are business owners who are losing everything and we just wanted to ask him a couple of questions,” Bergquam told Action News of the incident. “As I was saying that, he comes out of the apartment, grabs me by the arms, and tried to throw me down the stairs.”

Arias, on the other hand, recalls a different series of events.

“I asked him to leave, I told him this wasn’t the place, this was my home, and he refused to do it,” Arias explained. “So I moved him out of the way and I escorted him down the stairs. Folks didn’t want to give way to my private property, so I moved them out of the way.”

Arias was later cited for three counts of battery by Fresno Police, but investigators are still trying to determine if the Proud Boys did indeed tried to break into Arias’ home.

In a statement on his own Facebook page, Arias provided a detailed account of his side of the story, claiming that the safety of his home had been violated while his children slept inside.

“Bergquam and his companions bypassed security to reach my private condominium residence unannounced,” Arias wrote. “The short video that has been released only depicts a small fraction of a much longer incident. Indeed, the entire initial sequence of events, including the group members’ attempts to force their way into my residence, is not depicted at all.”

“I asked him to leave my home, emphasizing my kids were home and that I would not allow them to be placed in danger,” he continued. “I took precautions to ensure the safety of my family and protect them from individuals known to be armed and dangerous.”

It’s worth pointing out that Fresno does allow for concealed carry permits, and the Proud Boys are indeed known for being armed.

Arias writes that since the incident, he has received “numerous” out-of-town calls making additional threats against himself and his family and that he had been forced to take additional precautions for their safety.

This would not be the first time the Proud Boys have been accused of making so-called house calls to citizens. Last July, in West Philadelphia, several residents reported late-night visits from as many as one dozen armed Proud Boys members.

“This horror show just gets more and more surreal,” said community organizer Gwen Snyder, who had allegedly been the recipient of threatening behavior for months. “There are now two Philly residents, myself included, who received terroristic late-night visits from a crowd of gun-toting Proud Boys, and a third being threatened. They fucking flew Proud Boys in from across the country for this.”