Photography isn't a crime. But secretly recording local officials is.

Warning: This story contains a photo of graphic violence.

Prosecutors allege that Anderson broke Washington state law when she secretly recorded a conversation with Yakima City Manager Tony O’Rourke. However, Anderson may have had a very good reason for wanting to get a top city official on tape—she had been fruitlessly trying for months to get justice for her husband, who was left beaten and bloodied during an altercation with police earlier this year.

In April, Yakima police were called to the Andersons’ residence over a dispute she and her husband Russell were having with a former roommate. When the cops came, Russell Anderson got into an altercation with them. Anderson insisted that he was only trying to show the police officers his phone that had threatening texts from the former roommate, but the attendant police officers attacked.

Yakima police insisted that Anderson refused to obey their instructions and resisted arrest.

The following graphic picture, which was posted to the Anonymous Yakima Facebook page (among other paces), shows the injuries Russell Anderson sustained during the altercation: 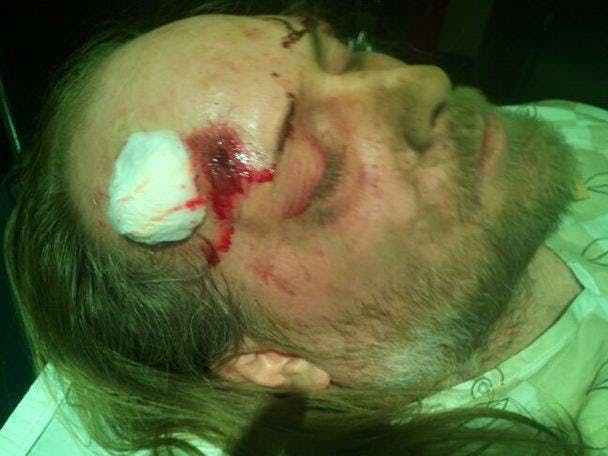 The picture, which was also posted to the Facebook page of local news station KIMA, drew the ire of local police.

“It’s important, if you’re going to post something in terms of something that may be slanted against law enforcement, [to] put the whole story out there,” Yakima Police Department Capt. Rod Light told KIMA. “Put all the information out there.”

Russell Anderson was charged with domestic violence and let out on bail, but his wife has spent the ensuing months attempting to get the police officers who beat up her husband charged with brutality. She’s reportedly been a regular fixture at city government meetings, but hasn’t had much luck.

In July, however, Joey Anderson scored a meeting with Yakima City Manager Tony O’Rourke to discuss her misconduct complaints against the city. During the meeting, she secretly took out her cellphone and recorded a 38-minute video, which she later posted to YouTube.

The problem is that, according to Washington law, it’s illegal to use an electronic deice to record any private conversation “without first obtaining the consent of all the persons engaged in the conversation.”

Now, Joey Anderson is facing wiretapping charges, which could land her a fine of $5,000 and up to a year in jail.

In an interview with the Yakima Herald, O’Rourke said that, even though he was acting in his official capacity when the video was taken and law does contain an exception for news-gathering, allowing just anyone to record anything he does could hamper his ability to perform the aspects of this job that need to reamin secret—like labor negotiations or real estate transactions. “I wasn’t concerned about anything I said in the meeting,” O’Rourke explained to the Herald. “It’s the principle of the matter.

For her part, Anderson told the Herald that the charges against her are unfair. “I firmly believe they are abusing their powers and it’s a misuse of the law,” she said.

H/T Photography Is Not A Crime | Photo by Peter Werkman/Flickr (CC BY 2.0)