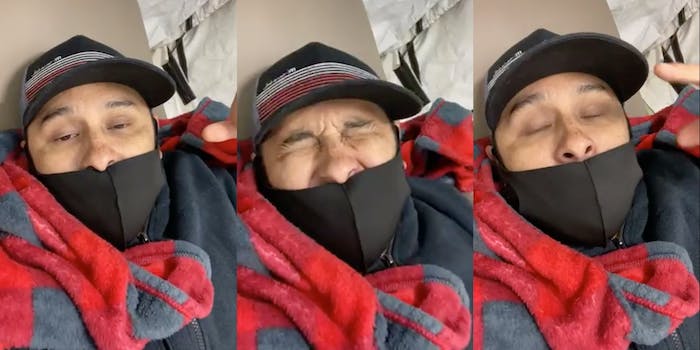 A former star on the Mexican version of The Voice died on Monday at 42 years old, just 48 hours after streaming his hospitalization on Facebook Live. He was hospitalized following an adverse reaction to vitamin butt injections.

Jerry Demara rose to regional fame following his appearance on La Voz and went on to become a Latin Grammy nominee. Billboard reported his death was due to complications related to COVID-19, but Demara’s video appears to suggest otherwise.

The nearly four-minute video shows Demara grimacing in pain and gasping for breath. He spoke to the camera from his bed at El Centro Regional Medical Center in El Centro, California, where he was admitted for severe vomiting and delirium. He explained to the camera in his native Spanish that he believed he was having an adverse reaction to vitamin injections in his butt.

“I am in the hospital because I have a problem, in the buttocks,” the father of two explained. “By mistake, on three different days spaced apart, I injected vitamins in the same area.”

Demara said his final dose of vitamin injections had been administered two days earlier. Vitamin injections are a common trend among celebrities, many of whom believe they provide an energy boost and assist in weight loss. It is unclear what went wrong in Demara’s case.

“For six hours I’ve had a pain level of 12,” Demara explained in the video. According to Too Fab’s translation, he then criticized the hospital for its insufficient care. “It’s horrible, horrible… they are bad people here,” he said. “They’re useless.”

Demara claimed the hospital made him wait for more than an hour before admitting him, despite his visible pain. They also allegedly denied him a glass of water.

“They told me I was inside the hospital but I’m actually outside in a tent. For six hours, you can see my face, I’m in pain,” he told his followers on the video. “Right here they treat you the worst… the worst. I don’t know what I can do… I already talked to the person in charge, she gave me her number and I talked to her twice, but now she won’t answer her phone. They gave me two pills, and they did absolutely nothing… the pain is at 11.”

Demara was transferred to Pioneers Memorial Hospital in Brawley soon afterward, but doctors weren’t able to intervene in time.

On Monday, Demara’s wife announced his death via Facebook.

“Family and friends the love of my life is already enjoying the glory of God, thank you all for your prayers,” she wrote in Spanish.

Demara’s family started a GoFundMe following his death to help cover funeral expenses. It has been up for just over a day and has already raised more than $26,000 of its $30,000 goal.

Demara’s official cause of death has yet to be confirmed.