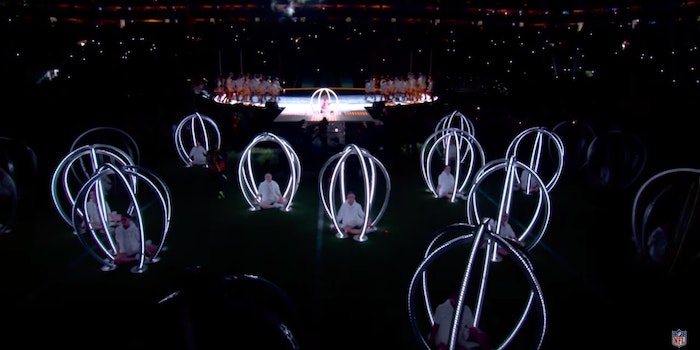 She also wore a Puerto Rican flag while her daughter sang, 'Born in USA.'

It’s been a long, dreadful January—from deaths of favorite icons to the spread of coronavirus to an almost-World War III. Sunday night’s Super Bowl halftime show, featuring Jennifer Lopez and Shakira on the same stage, took the heat off of that as people glued themselves to the screen to watch the historic performance.

And the stars made sure to make that moment memorable, making statements on a host of issues from immigration to the situation in Puerto Rico in the aftermath of the January earthquake. The show was rich with imagery ranging from children in cages, Jennifer Lopez donning American and Puerto Rican flags, people on the floor without lights, and lights in the background that symbolized cages.

The children in cages weren’t in literal cages. But they sure looked like it.

While some of the young singers were holding hands and stood at the front of the stage, the others were seen in a sea of oval-shaped carriages illuminated with white cage-like borders.

Putting kids in cages to “Let’s Get Loud”.

JLO and her daughter leading "Let's Get Loud" with all girls and kids in cages. That's a fucking MOMENT. #HalftimeShow pic.twitter.com/y64324LkYc

the shady subtle beauty of showing that kids are still in cages.#HalftimeShow pic.twitter.com/u91SwcgrcC

As of November 2019, the U.S. government was holding a record number of 69,550 migrant children in “custody,” including toddlers, infants, and teens—more than any other government in the world.

Lopez also made sure to remind her viewers about Puerto Rico—the island that was inundated by Hurricane Maria in 2017 and was rocked by an earthquake last month. President Donald Trump has been criticized for ignoring or oftentimes feuding with Puerto Rican officials during their turbulent times. As one expert after the hurricane, Puerto Ricans are more “colonial subjects” of the U.S., rather than citizens.

On stage on Sunday, Lopez’s daughter Emme sang “Born in the USA” while Lopez emerged draped in what appeared to be an American flag. When she flared it open, it showed the Puerto Rican flag: 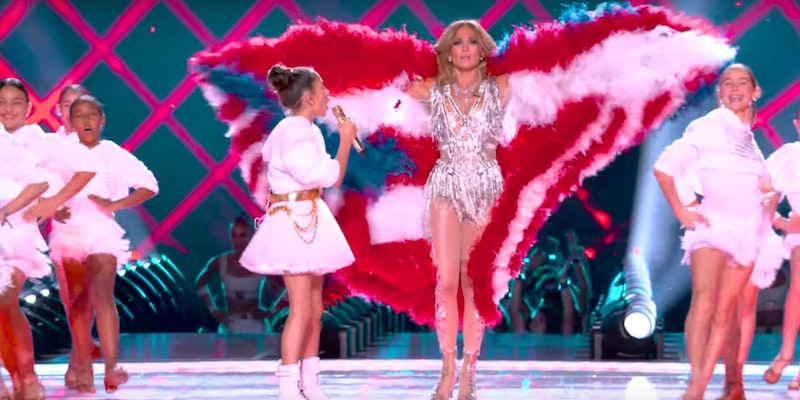 Meanwhile, the lights behind her crisscrossed to resemble cages.

Some pointed out other imagery that signified the state in Puerto Rico where, following the massive earthquake in January, thousands remain without power:

Children in cages, people asleep on the floor, thousands in Puerto Rico still without shelter, power or water. Imagery from the #SuperBowl #HalftimeShow pic.twitter.com/9tX2TVhdBV

There were some (mainly conservatives) on Twitter whose commentary veered toward the clothing of Shakira and Lopez. But many others were moved by the artistic statements made by the musicians. In the build-up to the Super Bowl, the anticipation of watching the two on stage was high—and they outdid themselves.