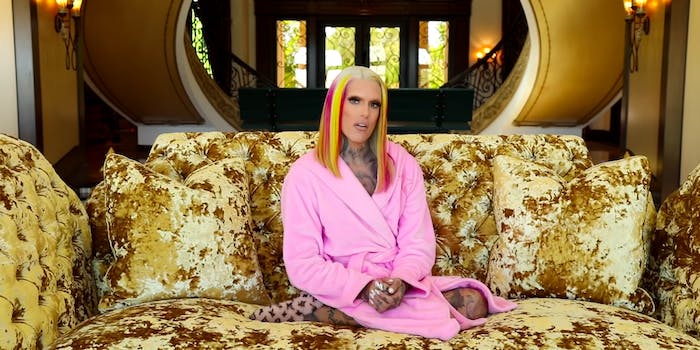 In a new apology video titled “Doing What’s Right,” Jeffree Star addressed many of his latest controversies. But after he shifted the conversation away from his own past with racism and toward the Black Lives Matter Movement, Star was accused of “hijack-tivism,” Cosmopolitan reports.

In June, YouTube star Tati Westbrook released a 40-minute video about her never-ending feud with YouTuber James Charles and said that Star and Shane Dawson set up the drama by telling her “poisonous lies,” among other accusations.

Amid the controversy, Dawson and Star lost brand partnerships over accusations of past racism. But Star’s silence on the issues ended on Saturday when he shared the new video on YouTube.

In the 10-minute apology, Star addressed claims made against him by Westbrook.

“Today, I will not be sitting here, showing a million text messages … I will not be entertaining it,” Star said. “My lawyers are entertaining it behind the scenes, but I will not be … I never tried to take anyone down. I’m not a villain in a movie. This isn’t a Netflix series with a crazy storyline. This is my real life, and a lot of things that are happening and being said are false.”

Star also apologized to Charles in a direct statement: “I would personally like to apologize to James Charles for the words that I’ve said and for my actions. … I let people really gas me up and get me going behind the scenes and I really fell for a lot of things and I got really caught up in the hype.”

But Twitter users felt Star’s intentions went astray when, amid his apology, he brought up the Black Lives Matter movement and named Black people who have been killed by the police.

“Now Breonna Taylor still has no justice, Black trans women are being murdered every day and the news is silent,” he said.

“Elijah McClain still has no justice and the countless other people who are murdered every single day while everyone goes about their business like nothing’s happening,” Star continued. “I think that drama and the beauty world, which I have definitely been apart of, it all has to stop.”

On social media, his critics pointed out that he was silent through much of the Black Lives Matter movement’s peak. One user wrote, “The way Jeffree star was silent on blm for the past month and a half and he has the audacity to use breonna taylor to distract the fact he’s a racist wow.”

Another Twitter user said, “Jeffree Star bringing up blm and the injustices in the black/trans community in his video is the grossest form of manipulation and deflection I’ve ever seen.”