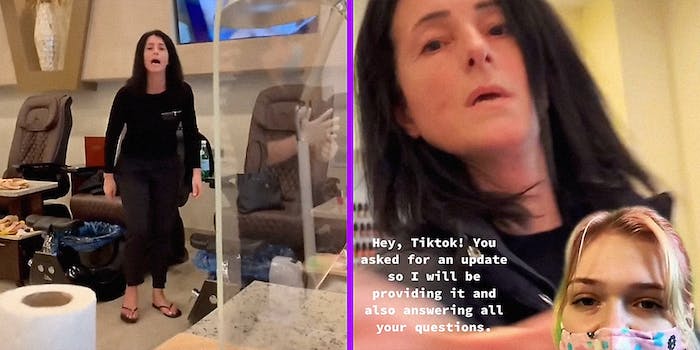 'Yes, I am pressing charges.'

A TikToker is accusing a so-called “Salon Karen” of attacking a young woman at a nail salon in Park Ridge, Illinois, after she was asked to wear a mask.

TikTok user @elsie_debue shared the video and says her daughter was in a chair getting her nails done when she asked a woman to wear a mask, leading to an argument. The viral video has nearly 2 million views.

The woman who refused to wear a mask gets up while arguing, seemingly prepared to leave the shop. The caption of the video reads, “Please help us find her!”

The overlay text says, “This woman assaulted my daughter at a nail salon because my daughter called her out for not wearing a mask.”

The video shows the young woman telling the unmasked “Karen” to “put your mask on!”

It’s unclear what the older woman replies. “You’re a doctor? Put your mask on,” the younger woman repeats as the woman notices she’s being recorded.

The “Salon Karen” says that not many people are dying from COVID-19. The daughter retorts that she knows people who have had the virus or died from complications.

“You can’t dispute this,” she continues. “You’re being rude and they have signs all over. And you’re fighting with an 18-year-old.”

Suddenly, the older woman tries to snatch away the young woman’s phone.

In an update video, the TikToker said staff had asked the “Karen” to leave and told her she wasn’t welcome back to the salon. The young woman says she started recording because the older woman became “belligerent with the staff.”

In a subsequent video, she says the violent Karen essentially went out of her way to approach her, attempt to snatch her phone, and hit her in the face.

In a follow-up video, the TikTok user says internet sleuths helped her locate the woman and her employer’s information, which she gave to the police.

“Yes, I am pressing charges,” she says. “It’s gonna be a long process, getting this done, but we’re gonna do it right.”