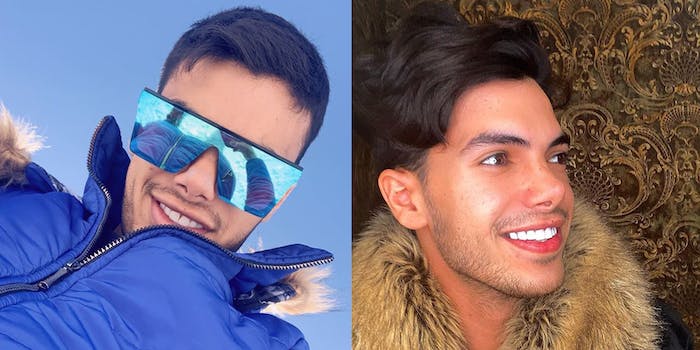 His death came days before he was to flee the country and claim asylum.

Gay Iranian influencer Alireza Fazeli Monfared was reportedly killed by members of his own family because he was gay.

Monfared had plans to flee the country due to its criminalization of homosexuality, according to Insider. Three members of his family allegedly carried out his death in what was described by an Iranian human rights group as an “honor killing.”

In order to be able to leave Iran and claim asylum, Monfared first needed to receive an exemption from Iran’s law-required military service.

Though sex between same-gender partners is illegal in Iran, subject to the death penalty when it occurs between adult men, admitting to an LGBTQ identity is not itself illegal. Homosexuality is, however, grounds for exemption from military service, so long as a committee agrees that the claim is genuine; the government classifies homosexuality as a mental illness.

Monfared had convinced the committee of his homosexuality and was waiting for confirmation he could leave the country when his half-brother reportedly intercepted the letter containing release paperwork.

Monfared had reportedly already been subjected to threats from his father’s side of the family, including murder, over his visible queerness. His father left a voice message supporting the threats, according to Insider.

After they discovered the letter, which not only confirmed Monfared’s sexuality but that he had disclosed it to others, his half-brother and two cousins allegedly made good on the death threats.

The three family members allegedly lured Monfared into a car by saying his father needed to see him and they’d been sent to pick him up. They drove allegedly Monfared to a remote village and then beheaded him with a knife before contacting his mother to tell her that she could find his body there, at the foot of a palm tree.

Alireza’s partner, who lives in Turkey, informed the Iranian lesbian and transgender network 6Rang that the men who allegedly killed him have all been arrested and charged with first-degree murder. The network warns, however, that this is unlikely to be an isolated case, especially as the police force is recording military exemptions for unspecified purposes.

Young LGBTQ Iranians and activists responded to Monfared’s death by filming themselves in public wrapped in the rainbow flag—despite the danger this poses. Celebrities also wrote messages of support online.

“My heart is broken hearing the story,” singer and actress Demi Lovato wrote.

Members of the LGBTQ community, 6Rang, and other activists are asking the rest of the world to take notice and speak up about the danger they face just existing as themselves. Okan Sengun of the LGBT Asylum Project told Insider that he heard from LGBTQ Iranians who said they “don’t want to be the next Alireza.”