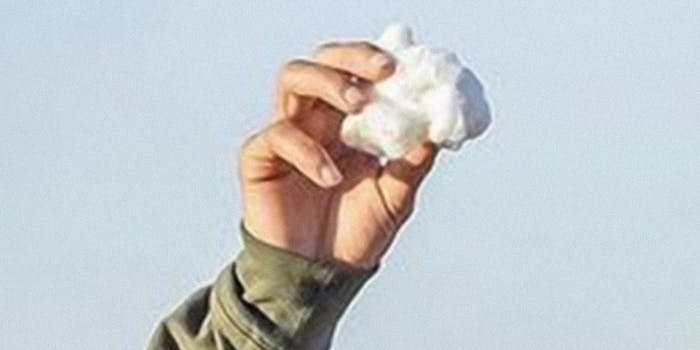 An interracial couple’s photoshoot has gone viral on Twitter—and not because of its cuteness.

Twitter user Pat Harrington (@bandeauxpat) tweeted three photos from the couple’s shoot on Tuesday. The pictures show a Black man and white woman posing in a cotton field. In one photo, the man is holding up a piece of cotton as he kisses the woman, who is grasping his neck with her right hand. (The identities of the couple and the date of the photoshoot are unclear; Harrington did not immediately respond to the Daily Dot’s request for comment.)

Harrington captioned his post simply, “In a cotton field?”

The cotton field photos were met with widespread disbelief, condemnation, and mockery online. Harrington’s tweet has received more than 250,000 likes and 45,000 retweets. Many of the people who retweeted the photos were astonished at the tone-deafness of the shoot, and they could not fathom why a Black man would agree to it.

“Look at that dummy fucking holding it damn,” @BlaccKenn wrote.

“How hard would it be to go to a field of marigolds, poppies, or fuckin Venus flytraps before a goddamn interracial couple takes engagement pictures in a cotton field?” @mcgarrygirl78 asked. “Dishonor.”

When words failed, several Twitter users resorted to memes—in one case even providing an answer to the popular Arthur fist meme.

Cheers nonetheless to the happy couple.