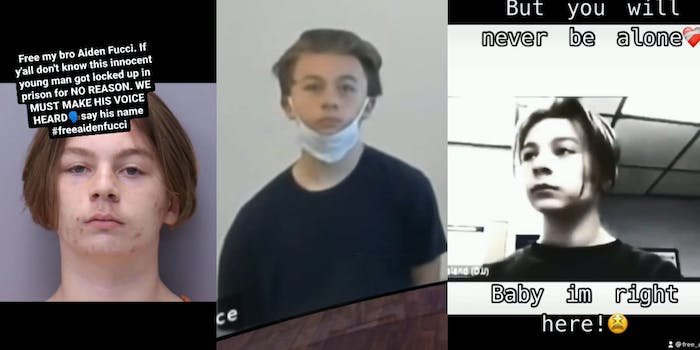 An account believed to belong to Fucci has also garnered thousands of followers.

Fan accounts for Aiden Fucci, the 14-year-old boy from Florida who is accused of killing his classmate Tristyn Bailey, are popping up on Instagram.

With names like “free_aiden99,” “fuccifreeaiden,” and “freeaidenfuccimyforeverlover,” the accounts champion the teen. Fucci was arrested and has been charged with first-degree premeditated murder, according to Action Jax News.

Fucci previously shared a disturbing Snapchat video—from the back of the patrol car—after getting arrested. He took a reflection selfie in the patrol car’s window, captioning the snap, “Hey guys has inybody seen Tristyn lately.”

Fan accounts with taglines, such as “free my boy” and “you’ll be home soon you ain’t do nun wrong, you innocent,” have been sharing photos and videos of Fucci with text that defends him. Some of the accounts are even simping over the teen.

On the other hand, accounts supporting Bailey and hating on Fucci have also emerged. These accounts feature usernames such as “hate.on.aidan.fucci;” photos of Bailey; and captions, including “gone but not forgotten” and “#justicefortristynbailey.”

Fucci has pleaded not guilty to first-degree murder charges, according to Click Orlando. A Florida judge has also reportedly ordered that he be held without bond.

He is being charged as an adult, Click Orlando reported. He was reportedly moved from the juvenile facility where he was being held and transferred to an undisclosed adult facility, where he will be separated from adult inmates.

Bailey was found dead near her St. Johns County home on May 9, with 114 stab wounds. The weapon believed to be used in her killing was located in a pond nearby. The weapon’s tip was not attached to it and was instead found in Bailey’s body, according to the state attorney’s office as reported by Click Orlando. Action News Jax also reported that Fucci’s mother, Crystal Smith, was accused of tampering with evidence in the case. An arrest warrant for Smith stated that she washed the jeans Fucci wore at the time the crime was allegedly committed, Action News Jax reports.

Back in May, according to Action News Jax, Fucci’s original attorney was allowed to withdraw from the case by a Florida judge; Fucci is now being reportedly being represented by a public defender.