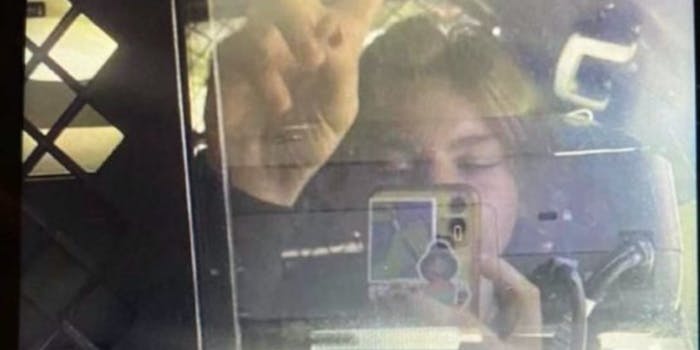 The Snapchat is just one of the social media posts being looked into by authorities.

A 14-year-old boy in Florida made a Snapchat post about the 13-year-old girl he is accused of killing.

After Fucci was arrested, he took a selfie for Snapchat, captioning it: “Hey guys has inybody seen Tristyn lately.” In the photo, the unhandcuffed teen can be seen in a reflection holding up the peace sign while sitting in the back of a patrol car.

Bailey was reportedly last seen early morning Sunday at a community center, local outlet WJXT reported. Her family reported her missing hours later, at around 10am local time. A neighbor found Bailey’s body that evening following a community-wide effort to search the area around the center for her.

After a press conference, a spokesperson for the St. Johns County Sheriff reportedly said that “all social media is being looked at and is part of the investigation.”

Fucci is being held at a Department of Juvenile Justice facility and was ordered by a judge at a court appearance on Tuesday morning to remain detained for 21 days or until the next court order, Click Orlando reported.

The Daily Dot has reached out to the St. Johns County Sheriff’s Office.