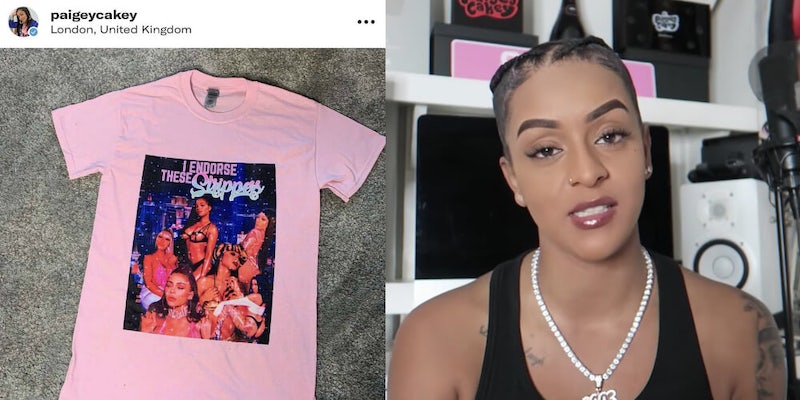 Influencer accused of selling shirt she was supposed to promote

One small business owner opened up a discussion on Twitter about whether influencers are obligated to promote the free products they receive.

T-shirt maker Shavar Kelly called out an influencer on Twitter for failing to follow through on an informal promotion agreement.

Paige Meade, better known as Paigey Cakey, is a London-based YouTuber and rapper. She told Kelly she would promote a T-shirt he sent her, according to the DMs posted by Kelly. BuzzFeed News reports that not only did Meade not promote Kelly’s shirt, but she also attempted to sell it.

Kelly’s thread shows that Meade stopped responding to Kelly’s DMs after he sent her the shirt. Months later, Meade allegedly posted the shirt for sale on Depop.

“I just want influencers to understand that, as business owners, when we send our products out to them, it costs us. It’s never free, so taking advantage results in our personal loss,” Kelly told BuzzFeed News.

Kelly is not alone when it comes to small business owners coming out against influencers.

Business Insider reported on the backlash one influencer received for writing an angry Yelp review for a restaurant after not receiving a discount on a meal. The Daily Dot previously reported on an influencer that had to cancel her events after allegations of being a scammer made its rounds online.

Kelly’s thread opened up a discussion about the relationship between owners and influencers.

“In all honesty, you handed out a freebie, @Paigey_Cakey posting it is a favour not an obligation. Had she taken money in exchange for the post, you would have had a case,” Twitter user @JuniorOgunyemi wrote.

Yet, another thought Meade did Kelly “dirty.”

“Next time be prepared to ask them for YOUR terms & conditions & not theirs. You’re the business. Don’t be phased by clout & following they have, lead the convo. Be mindful that if its free apparel they will feel less inclined to do it cah no money was involved,” Twitter user @KamLegend wrote.

The Daily Dot has reached out to Shavar Kelly.