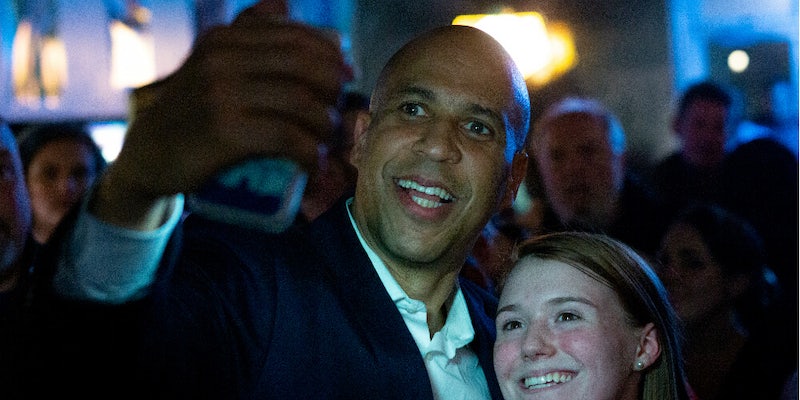 One influencer was allegedly offered up to $520 for her support.

Influencers convince thousands of fans to use their promo code for discounts on endless products, from fitness tea to makeup palettes. Now, these same social media icons could potentially influence the political process.

Super PAC United We Win confirmed to BuzzFeed News that it launched a campaign on AspireIQ, which is a platform where influencers find sponsorship opportunities, in order to reach potential voters on social media. United We Win’s campaign was titled “United We Win: Keep Cory Booker In The Fight.” AspireIQ has since removed the campaign.

“Tell your supporters to keep Cory in the fight with a small donation,” the PAC stated in the description of the campaign.

United We Win is unaffiliated with the official Booker campaign. But, United We Win announced it intends on pushing $1 million in Facebook and Instagram ads for Booker. The New York Times reported that this campaign boost did not change Booker’s anti-PAC stance.

Booker opposes the use of well-funded PACs, and a Booker campaign spokesperson told BuzzFeed News that his campaign does not offer sponsored content, also known as sponcons, to influencers.

“This is nothing to do with our campaign and this isn’t a tactic our campaign employs,” the spokesperson told BuzzFeed News in a statement on Monday.

United We Win told the Daily Dot it is trying to utilize social media as a tool.

“This is simply another way to engage dedicated grassroots supporters online, and those supporters will be compensated for their time in the same way that more traditional campaign efforts like canvassing are also often compensated,” Philip Swibinski, a spokesperson for United We Win, told the Daily Dot in a statement.

Influencer Amanda Johnson told BuzzFeed News that using her presence for political purposes crosses the line as an influencer and could put her in a polarizing position among her followers.

Johnson, who runs beauty blog Sequins and Sales, was offered $110 to $520 to represent the Booker campaign.

“The impact of this is much greater than just a product,” she added.

The Daily Dot has reached out to the Booker campaign.