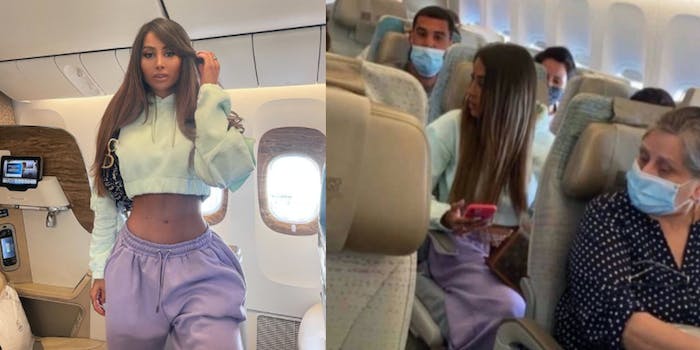 Her humorous response to the controversy is being applauded online.

A French influencer has a hilarious response to allegedly being caught lying about flying business class.

Océane El Himer, who has nearly 900,000 followers on Instagram, posted a photo on May 23 of herself in what appears to be business or first class. She said at the time that she was traveling to Monaco.

The comments on that post have since been disabled. Himer was reportedly exposed by a fellow passenger, who claimed that the influencer retreated to economy class after taking the photo, according to the Mirror.

The passenger reportedly posted a photo to Twitter of Himer sitting in economy class. The Daily Dot could not find the tweet in question, however.

Himer hilariously responded to the controversy on Thursday.

Himer posted another photo of herself on a plane. This time she’s with a friend, and they’re seating in business class, posing with their middle fingers up. She also had a message for her followers: “Cette fois ci promis j’ai payé,” she wrote with a wink emoji. The message translates to “This time I promise I paid.”

Her humorous response to the controversy is being applauded by commenters.