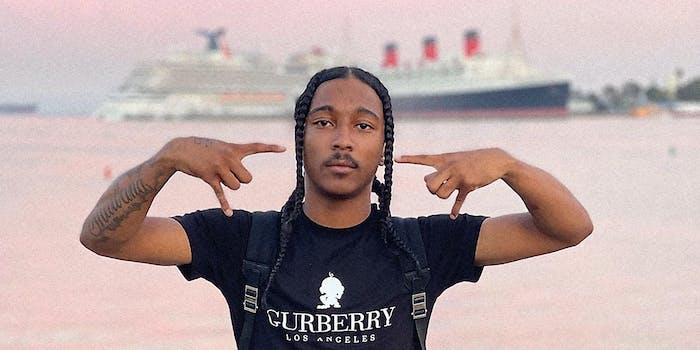 ‘No one deserves that’: Rapper killed on Instagram Live after allegedly dissing Nipsey Hussle

'Literally made my stomach turn.'

Rapper Indian Red Boy was broadcasting on Instagram Live when he was shot and killed in his car on July 8 in Hawthorne, California.

Hip Hop Wire reports that the 21-year-old rapper, Zerail Dijon Rivera, was parked behind his apartment when he was killed and pronounced dead on the scene, according to a police report.

The publication also reported that Rivera may have defaced a mural of Nipsey Hussle, a Los Angeles rapper who was murdered in 2019, and that his killing was gang-related retaliation. These claims are unconfirmed, and Rivera’s death is currently under police investigation.

Rivera was on Instagram Live with his friend, user @kapaalxt8, when he was killed. A recording of the broadcast has spread across Twitter.

“He defaced a Nipsey Hussle mural and they got him back for it. That gang stuff really ain’t a joke,” one user tweeted.

Many users shared their regret at having seen the video. “The Indian red boy video is traumatizing,” one user said.

The video also sparked a conversation online about the traumatic effects of violence being captured and shared on social media.

​​”[People’s] deaths being caught on cam then spread on the internet is one of the worst parts of the information age we live in currently,” user @xoey1o1 said in a viral tweet.