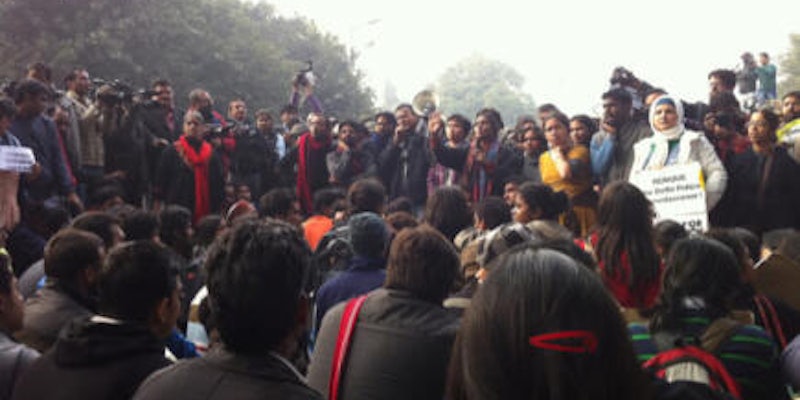 In the wake of countrywide protests following the gang rape of a 23-year-old woman, Indian police will begin publishing the names, addresses, and photos of convicted rapists online.

In the wake of countrywide protests following the gang rape of a 23-year-old woman, Indian police will begin publishing the names, addresses, and photos of convicted rapists online.

The public shaming is a new form of punishment that will first be implemented in New Delhi, Ratanjit Pratap Narain Singh, the country’s junior home minister, told Sky News.

“We are very serious about dealing with the problem and taking all possible action as early as possible,” Singh added.

On Dec. 16, the 23-year-old woman was gang-raped and brutally beaten by six men on a Delhi bus. She “underwent three abdominal operations and experienced a cardiac arrest” and was recently admitted to Singapore’s Mount Elizabeth Hospital, The New York Times reported.

While covering the protests, cameraman Bwizamani Singh was killed Sunday by police.

“Singh was covering a rally in Imphal, the capital of Manipur state, when he was shot by police firing on protesters,” the Committee to Protect Journalists reported. “Local news accounts reported that police said Singh was shot by accident while they were trying to disperse protesters with live ammunition. Five police officers have been suspended, the reports said.”

The rape has also captured the attention of Reddit, which has featured a handful of posts discussing the crime and police response to the protesters. In one thread, started four days ago, redditor visaisahero translated a statement from Kavita Krishnan, Secretary of the All India Progressive Women’s Association (AIPWA), criticizing the Indian government:

If we are to change any of this, we need to politicise the issue of violence against women, find out what women are saying about what is being done to them. The government has to listen. Just shedding a few crocodile tears within the confines of the Parliament is not enough, it is not enough to scream ‘death penalty’ and wind up the issue.

In 2010, there were 22,172 rapes reported in India, according to statistics from the United Nations Office on Drugs and Crime. The only country with more reported rapes that year was the U.S., with 84,767.

According to the Rape, Abuse & Incest National Network (RAINN), 54 percent of sexual assaults are never reported to police and 97 percent of assailants never spend a day in jail.

UPDATE: The woman whose rape sparked the protests has “died peacefully” at a hospital in Singapore.