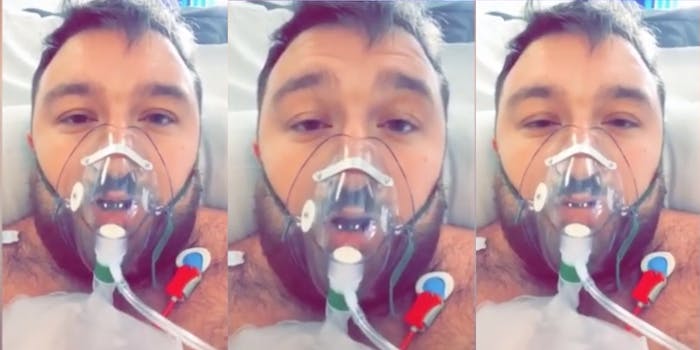 A man who initially believed that the coronavirus was a “bullshit” conspiracy has released a video from the hospital after catching the virus.

Chris Grailey, a 29-year-old British man, is pleading with the public to take COVID-19 seriously after being admitted to the intensive care unit of a hospital north of London.

Grailey believes he caught the virus while vacationing in the Canary Islands, where he suddenly lost his sense of taste and smell.

The situation only got worse after he returned home. Doctors diagnosed Grailey with COVID-19 and acute pneumonia soon after.

The Manchester native admits to not wearing a mask and thinking he was “invincible.”

“I paid the price. I have got no underlying health issues,” Grailey says. “I don’t want anyone making the same mistakes as me.”

Grailey, who can be seen receiving oxygen in the video, says that he’s uncertain whether or not he’ll be “coming out the other side.”

“The way I have felt in the last week has been as close to hell I have ever been,” he says. “I honestly sat there and was ready to just give up.”

Grailey also admits that he believed the virus was overhyped and no worse than the flu.

‘The reason I’m showing you all this is because I was the first to say it was all bullshit and ‘nah fuck it we’re young we won’t get it, it’s only bad flu, government conspiracy blah blah blah’—wrong!” he adds.

Grailey says he is currently receiving four different antibiotics, steroids, and oxygen in an attempt to fight back against the virus.

“It can get anyone, I’m 29 with no underlying health conditions,” Grailey reiterated. “This is serious shit. Please please wake up guys. There’s more to life than this.”

The man is hoping that his message will convince young people to take heed and make better health choices.

“Life is too short to risk your health. I have learnt the hard way I don’t want people making the same mistakes I have,” Grailey says.