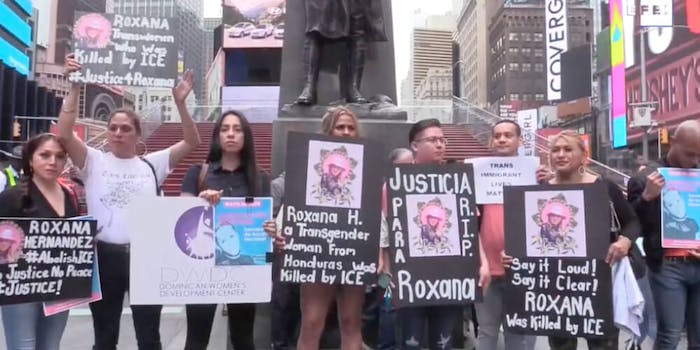 The family of a transgender woman who died in Immigration and Customs Enforcement (ICE) custody is furious that the surveillance video, which captured the moments leading up to her death, was deleted by U.S. Customs and Border Protection.

Roxsana Hernández, a 33-year-old transgender woman from Honduras, arrived at an ICE facility in San Diego on May 9, 2018, seeking asylum, along with a caravan of Central American immigrants. She died on May 25 at a hospital in Albuquerque, New Mexico, while in ICE custody.

The New Mexico Office of the Medical Investigator ruled that her cause of death was multicentric Castleman disease due to complications of AIDS. MCD is a rare disease that affects the lymph nodes and usually occurs in people with human immunodeficiency virus. Hernández’s family requested an independent autopsy, and now her family’s attorney is arguing that alone should’ve signaled to the immigration agency to anticipate a possible lawsuit.

“That autopsy alone made it clear there was interest in this case,” Lynly Egyes, legal director at the Transgender Law Center, told BuzzFeed News. “When a detainee death review is conducted, it’s important to keep track of all the documents to understand why someone died, and for that reason alone, they should’ve been keeping all of this evidence.”

When access to the video was requested, a supervisory officer explained that the “video is no longer available” because it is only “held in memory up to around 90 days.”

ICE has denied wrongdoing, claiming that adequate healthcare was provided to Hernández, however, BuzzFeed News claims it reviewed the agency’s report and found no indication that she received antiretroviral medications for HIV. ICE’s detention standards mandate that anyone in custody with HIV must be provided 30 days of medication when being transferred from one facility to another. Before her death, Hernández was transferred three times.

In an interview with BuzzFeed News prior to her death, Hernández explained that she didn’t want to leave her homeland but was forced out by violence.

“I didn’t want to come to Mexico—I wanted to stay in Honduras, but I couldn’t,” Hernández reportedly said. “They kill trans people in Honduras. I’m scared of that.”

A wrongful death lawsuit against ICE is currently pending.