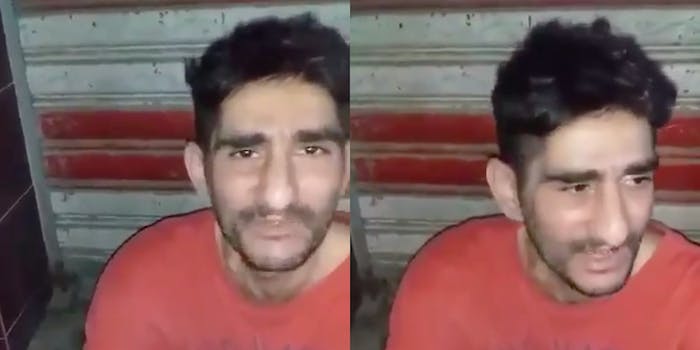 ICE deported a Detroit man who came to the U.S. as a baby. He died in Iraq without insulin

A Detroit man who was deported to Iraq with essentially no notice has reportedly died because he couldn’t access his diabetes medication.

Jimmy Aldaoud, 41, who had been living in the U.S. since he was six months old, died last Tuesday, Politico reported, after he was sent to a new country by Immigration and Customs Enforcement (ICE), even though he’d reportedly never been there and didn’t speak the language.

According to Edward A. Bajoka, an immigration attorney who reportedly knew Aldaoud, he likely died because he couldn’t access insulin.

“He was forcefully deported to Iraq a couple of months ago. He was born in Greece and had never been to Iraq. He knew no one there,” Bajoka wrote on Facebook last week. “He did not speak Arabic. He was a member of the Chaldean minority group. He was a paranoid schizophrenic. His mental health was the primary reason for his legal issues that led to his deportation.”

Jimmy was found dead today in Iraq. The likely cause of death was not being able to get his insulin. He is a diabetic….

In a video shared by Imran Siddiqi on Twitter, Aldaoud is seen explaining his circumstances from the streets of Iraq.

This man, who had lived here since he was 6 months old died as a direct result of Trump and ICE. This video of him sitting on the streets of Iraq with nowhere to go and no access to the insulin he needed should haunt us forever. #JimmyAldaoud
pic.twitter.com/707eLexV1V

“I’ve been in the United States since six months old and… just two and half weeks ago immigration agents pulled me over,” he said at the beginning of the video, adding that they said he was going to be sent to Iraq.

“I said I’ve never been there, I’ve been in this country my whole life,” he says in the video. “They just wouldn’t listen to me, they wouldn’t let me call my family, nothing.”

He says in the video that the agents “forced” him and now he was lost in a foreign country. “I’m here now, I don’t understand the language, basically I’m living in the street,” he says. “I’m diabetic. Ii was kicked in the back a couple days ago to get off the guy’s property.”

Aldaoud, who was from a Detroit suburb in Michigan, was deported to Iraq in June, with no knowledge of Iraqi and only $50 in his pockets along with some insulin medicine, the Intercept reported. He also reportedly battled with mental illness. The lengthy profile detailing Aldaoud’s life explains that he was homeless and battled addiction for a large part of his life, in part owing to strained relations with his alcoholic father who kicked him out in his teens. This affected Aldaoud’s citizenships status; he’d come here as an Iraqi refugee with his family, who belonged a Christian minority in Iraq.

Although never diagnosed, he also exhibited symptoms of bipolar schizoaffective disorder, according to the Intercept.

The video showing him on the streets of Iraq has haunted many, especially since his death:

#JimmyAldaoud was more American than @FLOTUS. Fuck this.

This video is of Jimmy taken in Baghdad two weeks after his deportation. I’m sharing with permission from Jimmy’s lawyers. Jimmy has been in the US since he was 6mo old—he was born in a refugee camp in Greece to Iraqi Christian parents. RIP#JimmyAldaoud https://t.co/1182x6GRAY pic.twitter.com/KF8RUOtKiH

This is just horrible, just horrible this man died alone in a foreign land with no one to lean on. @realDonaldTrump you are a coward, and a weak individual if god is real I hope he/she gives you the karma you deserved you sick individual.#JimmyAldaoud https://t.co/NE7IRgEnim

My Senators, @tedcruz and @JohnCornyn, are complicit in this senseless cruelty. https://t.co/4sSQteWbsk

Aldaoud himself was born in Greece, not Iraq, and some expressed anger about that on social media.

My first cousin was deported by ICE. He wasn't even born in Iraq he was born in Greece. What a fuckkkkked up world we live in. #JimmyAldaoud #justiceforjimmy pic.twitter.com/S6PW3RbHDE

Aldaoud was also sent to Najaf in southern Iraq, which was a concern for many. According to the Intercept, deportees are usually sent to Baghdad; Najaf remains a Shia stronghold where a Christian minority would like Aldaoud would be easier to target, according to local experts.