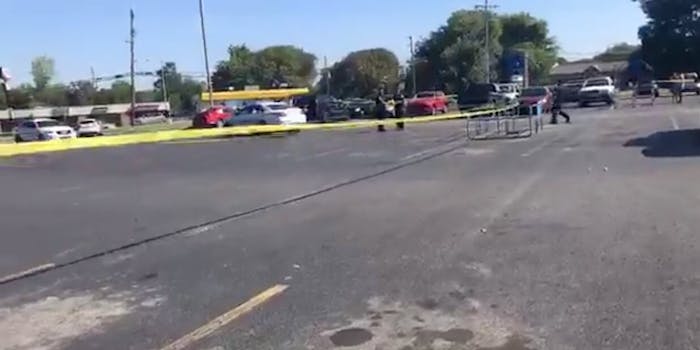 The man from Mexico reportedly drove toward the agent.

A federal immigration officer in Tennessee shot and injured an undocumented immigrant while trying to take him into custody, News Channel 5 reported this week.

Around 7am on Tuesday, police in Antioch, Tennessee, responded to shots fired in the vicinity of a grocery store. U.S. Immigration and Customs Enforcement spokesperson Bryan Cox told News Channel 5 that FBI and Department of Homeland Security personnel were trying to flag down an undocumented immigrant pertaining to alleged immigration law violations.

The 39-year-old man from Mexico reportedly tried to flee in a white box truck and drove toward the immigration agent.

Cox told News Channel 5 that the individual did pause at certain points but didn’t stop even when the agent was directly in front of the truck. The agent fired two rounds.

According to detailed description of surveillance footage obtained by News Channel 5, the truck was seen parked in the parking lot before a white pickup truck drove in with a car with flashing lights. The truck is seen driving away right before an agent raises his hand and pointing at the vehicle.

The agents were later seen chasing the truck.

The man, who reportedly had been deported numerous times and has prior convictions that are violent, was taken into custody and is receiving medical treatment a Nashville hospital. He had surrendered, and the box truck was found with one bullet hole at a mobile home park nearby.

An FBI spokesperson told News Channel 5 that officials are looking into the matter as potentially an assault on a federal officer.

“The federal government’s inability to arrive at comprehensive immigration reform results in situations like what happened in Antioch this morning,” Nashville Mayor David Briley said in a statement according to News Channel 5, adding that his main priority is “safety and well-being of all of the residents of Nashville.”