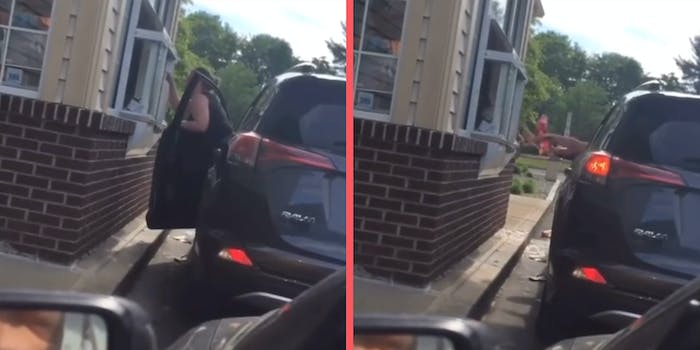 'Like, what could have possibly happened to trigger this much of a response.'

A viral TikTok video shows a hysterical Karen losing her mind at a drive-thru, demanding to know an employee’s name before screaming and driving off without a flip-flop.

Posted in April by viral video aggregator @ghettogaragebuilds, the footage is from a fast-food drive-thru, where a Karen and an unseen employee are in the midst of a serious argument. It dates back to July, nearly a year ago, but has resurfaced in virality this week on Reddit.

She demands: “What’s his name? Tell me your fucking name!”

The hysterical Karen opens the door and gets out of her car but continues to argue from inside her door window.

“He is getting fucking reported,” she yells, pointing aggressively. “What’s your fucking name?”

After the Karen doesn’t get what she wants, she throws something to the ground.

“You’re a piece of shit!” she yells before screaming, “Bitch!”

As she gets back into her car to drive off, the unseen employee chooses to match her energy and tosses a drink inside her vehicle.

“You fucking piece of shit,” she says again.

The Karen throws something back, but he returns fire while yelling something unintelligible at her.

She screams bloody murder and speeds off, apparently losing a flip-flop in the process.

It’s received 2,900 upvotes and 292 comments since resurfacing on Reddit’s Public Freakout forum on Thursday. As usual, the comments in the Reddit addition were comical. One redditor asked, “Coffee or ice-cold drink?? Either way, that final scream is so satisfying.”

“This Karen really opened the door but still stuck her body out the window,” said another.

One person wonders how it could’ve escalated to this point: “Like, what could have possibly happened to trigger this much of a response. I’ve gotten completely wrong orders before, and I’m just like ‘well shit, I guess I’m eating this…'”