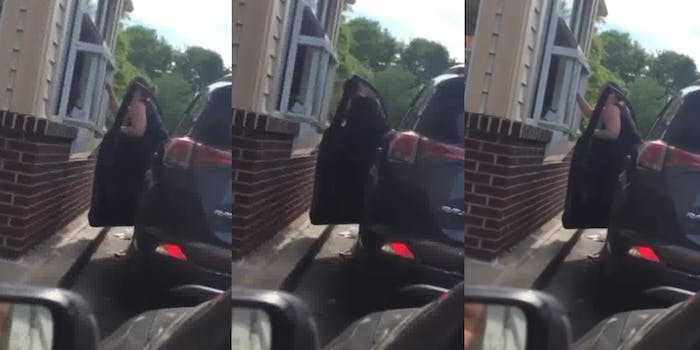 'What’s his name? Because he is getting reported!'

A 47-second clip is going viral for showing a “Karen” blow up on a fast-food employee in a drive-thru. The video was posted to TikTok in July and was posted to Reddit’s FuckYouKaren forum yesterday, where it’s amassed over 180 comments and 1,000 views since. The restaurant and woman in the video are unclear, but the situation displays behavior that isn’t uncommon for Karens in the forum.

“I want my fucking money back,” the woman is immediately heard yelling toward the drive-thru window. Then an employee is seen handing her a bag of food while a car passenger can be heard yelling, “Cheyanne, go, go, leave, leave.” Karen responds by yelling, “No, I didn’t get my fucking coffee,” but the passenger continues telling her to go. Another employee is then heard telling her that she is willing to make her coffee and that she has been trying to explain that to her. But the car passenger insists on her leaving, without the coffee being prepared, and continues to tell her to drive off.

“What’s your name? Tell me your fucking name,” Karen demands as she steps outside of her vehicle and approaches the restaurant’s window. “What is his name? Because he is getting reported,” she demands again. The employee refuses to reveal his name, instantly sending Karen to spiral. From the video, it appears she throws something onto the ground before yelling, “You’re a piece of shit bitch,” at the employee.

Karen then gets back into her car but the discourse continues. Food is then seen being thrown into Karen’s car from the drive-thru window, which she instantly responds by throwing her drink at the employees within seconds of the occurrence. Just as she puts her car in drive, she halts the brakes and lets out a loud, hostile scream that can be heard from the car recording behind her. The video then cuts off as she exits the premises.

We can assume she went home to make her own coffee.