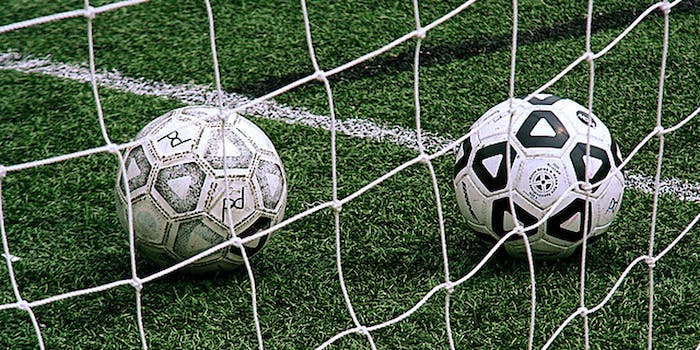 Here’s how the U.S. team could advance in the World Cup

Today's game is a big one.

Fifteen million Americans watched the United States defeat Ghana on Monday. That’s a lot of new faces at the bar. Winning is great and all, but the U.S.’s four-nation tussle in Group G for two bids in the final 16 at the World Cup gets hairy when we move into goal differential and tie-breakers. According to ESPN’s Soccer Power Index, the U.S. has a 65 percent chance to advance but only a 22 percent chance to win Group G. How does that even work out?

The Unites States faces Portugal in the World Cup Sunday in the driver’s seat. After Germany’s tie with Ghana on Saturday, here are the Group G standings headed into the pivotal game in Manaus:

With a win (worth three points), the United States books its ticket to the final 16 phase of the competition. Win and you’re in, it’s that straightforward. Thursday’s once-crucial game with Germany becomes an opportunity to top the group outright, but its drama is significantly reduced for American fans.

A United States win likewise eliminates Portugal, leaving Germany and Ghana jostling to be the U.S.’s plus-one in the round of 16. To avoid competitive fishiness, FIFA schedules the third games simultaneously: The U.S. and Germany play Thursday at noon EST, as do Ghana and Portugal. Unfortunately, any other result on Sunday brings gridlock and chaos heading into Thursday.

If the United States and Portugal draw

At the World Cup, draws are worth one point, and the standings would look like this:

With a draw Sunday, the United States still has the inside track on a spot in the round of 16. The problem is, its goal differential tiebreaker is precarious. Portugal and Ghana will be out for blood, and a high-scoring win by either (but most dangerously Ghana, given its more manageable goal differential), coupled by a loss to Germany, could mean that the United States is eliminated.

If the United States loses

Make no mistake, this is not a game the U.S. can afford to lose. The blueprint for American fans since the groups were seeded in December has yet to waiver: Beat Ghana, tie Portugal, curl up in the fetal position against Germany, survive and move through with four precarious points. But if the U.S. loses to Portugal, here’s what it looks like.

If you like to watch the world burn, this is your ideal scenario headed into Thursday. Here, even Germany could be out if it loses to the U.S. and Portugal defeats Ghana. All four countries are on high alert, and it’s a red tide beach where everyone has to play for a result.

With this potential backdrop, for American fans it’s still fairly simple. The U.S. cannot survive group play if it loses to Germany because any outcome in the other game (Ghana wins, Portugal wins, both nations draw) means being leapfrogged points-wise.

The results of Portugal’s bad, 4-0 loss to Germany are largely circumstantial. When Real Madrid’s Pepe lost his temper, headbutted Thomas Muller, and left his team playing with 10 men, the flood gates opened goal-wise. The spine of this Portugal team is its three starting stalwarts that play for European club champions Real Madrid. Of those, Pepe is suspended Sunday, Fabio Coentrao’s tournament is finished after a thigh injury sustained against Germany, and reigning best player alive Cristiano Ronaldo is hobbled but in uniform.

That’s two big-time defenders that the United States doesn’t have to think about. It gets worse for Portugal. Bruno Alves is nursing a muscle strain and is doubtful; starting keeper Rui Patricio and striker Hugo Almeida are likewise hurt. Five of Portugal’s starting 11 is likely unavailable today.

Problem is, Patricio’s backup Eduardo is just as good and more experienced at the national team level. Tim Howard was forced into action for only two saves against Ghana because, despite 31 crosses from the Africans, only two were completed in the box. With elite scoring threats in Ronaldo and Nani, Portugal is a desperate team (a draw in Manaus does it very little good), forced to deploy its gunmen and go for the throat.

Headed into the World Cup, Ronaldo had the luxury of being in the same boat as the other two greatest living soccer players, Lionel Messi and Luis Suarez. Ronaldo and Messi have badly underperformed for country; Ronaldo and Suarez entered the World Cup injured and with good reason to rest. Messi has scored twice for Argentina and lifted it to two wins; Suarez played like a galloping ghost and buried the English single-handedly.

Ronaldo’s legacy is on the line Sunday, and that extra motivator for one of the most self-absorbed and competitive athletes we’ve ever seen is not a good intangible to face.

The good news is that every other intangible—fitness relative to the Amazon humidity and heat, depth, momentum, competitive slack; the fact that the U.S. defeated Portugal’s golden generation 3-2 at the 2002 World Cup—comes up U.S.A.