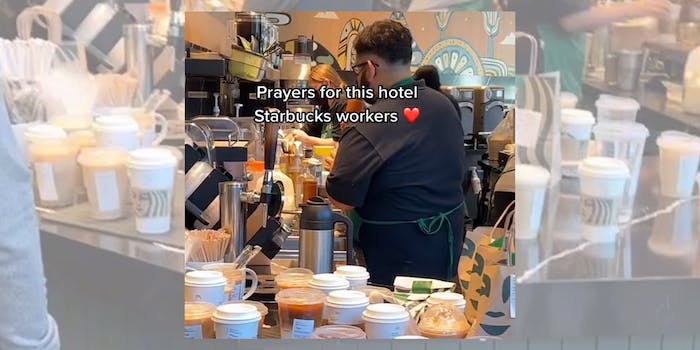 ‘Everyone who ordered here has never had a coffee service job and it shows lmao’: Viral TikTok shows hotel Starbucks overwhelmed with orders

'Prayers for these hotel Starbucks workers.'

A stressful scene at a Starbucks in California went viral. TikTok users understood immediately what the problem was.

In the video, the person recording films Starbucks workers at a hotel. The employees are seen making drinks as customers look on and the station to pick drinks up is filled with completed orders. The creator added text in the video that says, “Prayers for these hotel Starbucks workers.”

The caption reads: “Everyone who ordered here has never had a coffee service job and it shows lmao.”

According to the user who posted the video, @laurunelaun, this took place at a Hyatt Regency in Orange County.

In any service setting, the constant flow of customers taking their orders and leaving is beneficial to the business. But in this case, letting the pick-up station get full is causing the orders to be backed up. This video has received close to 2 million views in four days. The comments section sympathized with the workers.

“The fact that no one picks up their drinks after they’re called too,” one person commented. Someone else commented, “They’re getting watched like animals in a zoo.”

“I would quit lol,” someone added.

Then again, not all Starbucks are created equal. Sure, some baristas flub orders at flagship locations. But the big discrepancy comes when you place a more stripped-down Starbucks in, say, a Target. Suddenly, customers are attempting to pay via Starbucks gift cards at the Barnes & Noble Cafe.

Mix a less-efficient-because-it’s-at-a-hotel Starbucks with unrelenting customer expectations about Starbucks, with perhaps guest who order from their rooms upstairs, and one can see why this happens.

We’ve reached out to Starbucks.