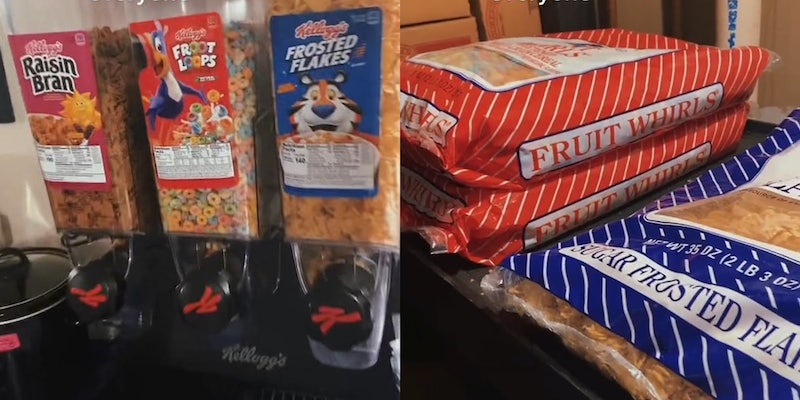 ‘The hotels be lying to everyone’: Worker exposes hotel for claiming to serve Frosted Flakes, Raisin Bran, Froot Loops in viral TikTok

'The least they could do is have some real froot loops damn.'

TikTok user @khammer123 has gone viral after exposing an alleged secret of the hotel industry.

@khammer123’s video, which now sits at more than 998,000 views, shows a typical continental breakfast display of cereals, each one bearing a recognizable name brand. However, as the video continues, @khammer123 reveals that the hotel is actually stocking their dispensers with generic brands.

Whereas the display offers Raisin Bran, Froot Loops, and Frosted Flakes, a walk to the stock room reveals generic brands of cereal apparently used to stock the guest-facing containers featured in the hotel spread.

The video divided TikTok users. Some were enraged, saying that if they see the name brand label, they expect the name-brand product.

“These hotels make a killing,” writes one user. “The least they could do is have some real froot loops damn.”

“You do know this can actually be a lawsuit,” added another. “False ad, defamation of known brands, emotional stress, etc.”

Some users’ concerns were more serious. Several commenters noted that the non-name brand cereals may have different ingredients than the name brand products. For people with allergies, they argued, this could pose issues as they might believe they are eating a product they know to be safe for them to consume.

“I’m not familiar with off brand vs name brand but if they use different ingredients this could actually be very dangerous,” explained one TikToker.

The similar ingredients may be one of the reasons others theorized that, even though the labels were different, the cereals were probably made in the same factory.

“Same thing,” noted one user. “Made at the same factory, just put into different packaging.”

Additional users said that, no matter if the ingredients were slightly different, the two products probably tasted identical—and even if they didn’t, they wouldn’t complain about the free breakfast.

“It tastes the same,” stated a TikToker.

“I ain’t even be tripping let me enjoy my complimentary breakfast,” added another.

So what’s the lesson from all this? According to @khammer123, the moral is simple. As he says in the now-viral video, “Don’t trust anybody.”