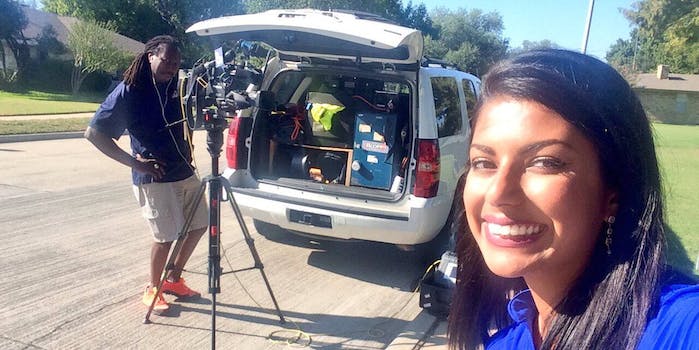 Newscaster gets pulled over for driving a ‘suspicious truck’ while ‘Hispanic’

People (presumably white) are at it again with calling the cops every time they see a brown person doing literally anything. This time it happened to Texas newscaster Homa Bash and her cameraman, who were stopped by the cops after reports of “Hispanic-looking woman & black man with a suspicious white truck & camera.”

When you get the cops called because a 'Hispanic-looking woman & black man with a suspicious white truck & camera' are near a school 😂 pic.twitter.com/6wuMmXzliV

Bash, who is actually Indian, (but that’s beside the point) tweeted about the incident, saying Plano Police were chill about the whole thing. But others responded with similar experiences of being assumed suspicious because of their looks.

Had the same thing happen to me once in New York. So whenever I knock on doors I always have my station micro phone out

I got pulled over during my daily run for looking suspicious. They said I "took off fast" when I saw them. "Um, thanks?"

//@HomaBashNBC5 Same thing happened to me when I was 16; Was walking out of a park in a mostly white neighborhood. It's just life (sadly). 😔

Thankfully, this particular instance of cops pulling over people of color ended in laughs, but incident after incident shows that it often doesn’t.