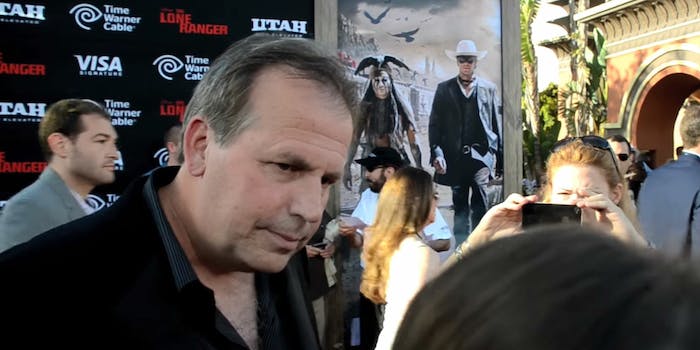 Disney writer compares being called ‘anti-vax’ to the N-word

The writer's credits include 'Aladdin' and the 'Shrek' and 'Pirates of the Caribbean' series.

Terry Rossio, a Hollywood screenwriter known for his work on the Shrek and Pirates of the Carribean franchise, has come under fire on social media for saying that being called “anti-vax” is comparable to being called the N-word and using the racial slur to prove his point.

In response to a fellow Hollywood writer’s tweet promoting a UNICEF vaccine donation drive, Rossio used the N-word to illustrate how he felt anti-vaccination advocates are unfairly maligned.

“My heart goes out to all the parents of vaccine damaged children, who have to not only endure the sadness of their loss, but also the vitriol of ill-informed and insensitive people (such as those here). Anti-Vax is equivalent to calling someone a [n-word] and makes as little sense,” Rossio tweeted, using the full racial slur.

The anti-vaccination movement (also referred to as “anti-vax“) is a movement of people who believe, without any actual scientific evidence, that vaccines can cause various illnesses or developmental problems, including autism.

Benson, the Twitter user Rossio initially responded to, called out Rossio for his use of the slur, but Rossio proceeded to double down on his initial point.

I'm pretty open minded and ready to be proven wrong, but all the scientific research I've read about this topic doesn't support that viewpoint. Feel free to show me otherwise, but please never come on my feed with the n word again.

Benson, possibly recognizing a lost cause, eventually tapped out of the conversation, but that didn’t stop Twitter from reacting with incredulity. Even Dictionary.com’s official Twitter account stepped in to offer its professional opinion.

The n-word is so profoundly offensive that a euphemism has developed for those occasions when the word itself must be discussed.

The same cannot be said for the term "anti-vax." https://t.co/RF7rdpMx8P

So let not call them anti-vaxxers… pic.twitter.com/1mTclKx34h

This argument made as much sense as the plot to Pirates of the Caribbean 3.

VentureBeat writer Jeffrey Grubb had a particularly salty takedown of Rossio’s anti-vax statements, saying, “God, this is such a good point. I remember how American founders and citizens enslaved vaccine skeptics for decades. And then, even after freeing them, the government enshrined laws to marginalize vaccine deniers and to deny them wealth and opportunity. That’s just history.”

God, this is such a good point. I remember how American founders and citizens enslaved vaccine skeptics for decades. And then, even after freeing them, the government enshrined laws to marginalize vaccine deniers and to deny them wealth and opportunity. That's just history.

When some white guy claims having legitimate concerns about public health issues is on the same level as systematic oppression based race. pic.twitter.com/RniXe2NClw

Rossio’s original tweet has gotten ratioed something fierce, with 2,400 responses. Rossio’s other writing credits include Aladdin, plus the upcoming Jonny Quest movie.

The Daily Dot reached out to Disney for comment but did not immediately receive a response.