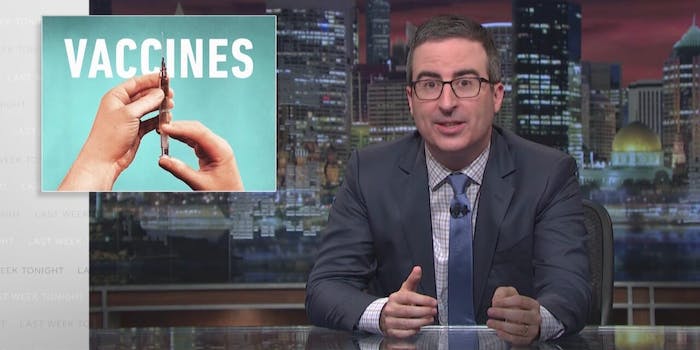 The U.S. is seeing more breakouts of preventable diseases.

Although John Oliver briefly addressed the lawsuit he’s facing from a coal mining CEO over his coal segment last week, he spent the majority of yesterday’s Last Week Tonight episode on vaccines and the nearly eradicated diseases that have made a return because of anti-vaxxers.

There was a time, Oliver explained, when people waited in line (like people do now for iPhones) to get a polio vaccine. But now some parents are outright refusing to vaccinate their children—or calling for smaller or more spread-out doses. Despite a discredited study that resulted in the doctor behind it losing his medical license, some still fear a link between the MMR vaccine and autism, while Donald Trump linked the two before his presidential run. (There is no link between vaccines and autism.)

Oliver knows he probably won’t change many minds through his segment, but he illustrates many examples of what has happened and will continue to happen without vaccinating children. Measles breakouts are occurring more often and the disease is spreading, children who can’t get vaccinated are more at risk of becoming sick, and completely preventable diseases are causing permanent damage and death.

At the heart of it, Oliver gets the constant terrifying feeling that parenthood, generally speaking, creates. And he knows about making that choice to vaccinate his own child.

“For what it’s worth—and if this helps at all—I have a son,” Oliver said. “He is 19 months old. He was born prematurely following a very difficult pregnancy, and I worried about his health and I still worry about his health a lot. But we are vaccinating him fully on schedule, and if I can overcome the temptation to listen to the irrational shouting of my terrified lizard brain, then I believe everyone can.”