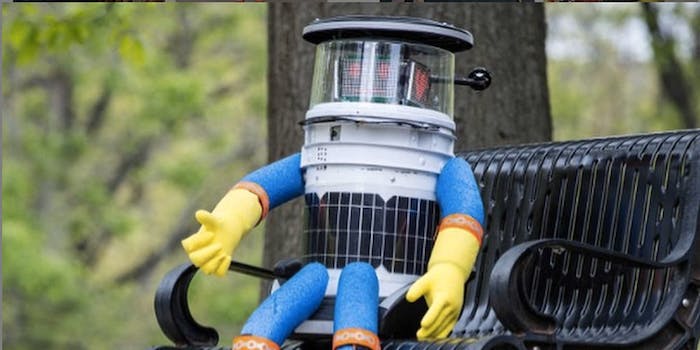 HitchBOT met an untimely demise while in Philadelphia over the weekend when some dude in a football jersey stomped its head into a curb. Newly found footage of the hitchhiking robot’s attacker shows us just how brutal things got.

YouTube star Jesse Wellens got his hands on the surveillance footage from the spot where hitchBOT was decapitated and left for dead.

I got the surveillance footage!!! @hitchBOT going thru it now! #PvPNews

He then shared the pivotal moment on his Snapchat, and now that footage has been shared with the world.

Many are speculating that the man seen harming hitchBOT is wearing a Philadelphia Eagles jersey. SB Nation sums up why this shirt is so rife with meaning: “We all kind of knew it was going to be an Eagles fan before video emerged, right? Let’s be real here—even Eagles fans know they’d kill a freeloading robot. This is the City of Brotherly Love, not Roboterly Love.”

But does hitchBOT’s family blame the city of Philadelphia and its monstrous sports fans for what happened? “Not at all,” Brigitte Dreger-Smylie, a hitchBOT project manager, told the Daily Dot in an email. “What happened in Philadelphia could have happened anywhere, and we always knew there was a risk of hitchBOT being damaged or stolen when we released it into the wild.”

Dreger-Smylie also said that hitchBOT’s ill-fated journey was not for naught.

“hitchBOT has had many amazing experiences around the world. During its two weeks in the U.S., it crossed two items off its bucket list, including seeing the lights in Times Square, and starting the wave at Fenway Park.”

His family is waiting for his mangled body to be returned to his home in Canada before deciding where he’ll go next. “We want to assure our fans that this great experiment is not over,” Dreger-Smylie said. “For now we will focus on the question ‘what can be learned from this?’ and explore future adventures for robots and humans.”

Update 4:23pm CT, Aug. 4: According to Gizmodo, the supposed surveillance video footage showing hitchBOT’s attack was staged by Wellens and fellow YouTuber Ed Bassmaster. They believe the man in the Eagles jersey was Bassmaster himself.

Now there’s speculation that Wellens and Bassmaster were the ones who destroyed poor hitchBOT: “Nobody seems to know where hitchBOT’s remains currently reside. Did Wellens and Bassmaster disassemble hitchBOT as a ‘prank?’ Did they send the message to the Canadian researchers? And if so, what’s the prank? Is media attention in and of itself a prank?”