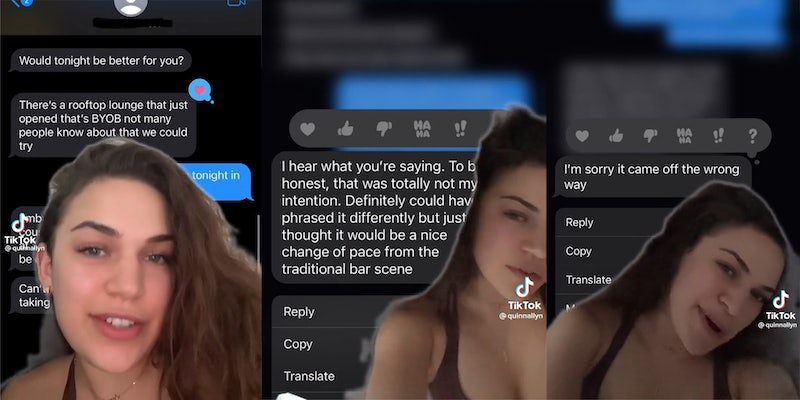 ‘Quite literally escaped my own episode of SVU’: Woman details creepy rooftop date plan with Jake from Hinge

A TikToker says a man she met on Hinge suggested they go on a first date to a “BYOB rooftop lounge,” only to find out that the location was the rooftop of his apartment complex.

In the video posted by TikToker Quinn Martin (@quinnallyn) on July 20, she shares screenshots of an iMessage conversation with “Jake from Hinge,” in which he suggests they meet up at a “rooftop lounge that just opened.”

“A couple of hours before the date, I asked him for the address. I wanted to see what the place was all about,” Martin says in the clip. “He sent me the address of an apartment complex.”

Martin says she asked him if it was a restaurant because she couldn’t find it online, to which Jake responded, “Haha no.”

“So I’m thinking, no way is this man trying to trick me into coming to his apartment building,” Martin continues. “No, that’s exactly what he was doing.”

Martin then shows a text from Jake apologizing for “phrasing” his date proposal wrong after she confronted him for not disclosing that the address was his apartment, saying, “I’m sorry it came off the wrong way.”

The video is captioned, “Quite literally escaped my own episode of SVU,” and has garnered over 691,000 views as of Wednesday. In a follow-up video, Martin shows a text from Jake threatening that his “friend at TikTok” has her “account queued up for deletion” and that the “cops aren’t happy” in response to her not blurring out his address in the original TikTok.

@quinnallyn Replying to @driftingmillennial i didnt give out his address? I thought it was a rooftop lounge!!? 🤔😌😁 #whotoldjake #fyp ♬ original sound – Quinn Martin

In the comments, users put Jake on blast for trying to trick Martin into coming to his apartment without being transparent about the location of their date, warning her that the situation could have become dangerous.

“In the phrasing” as in lying to lure you to his apartment?!” another wrote.

Other commenters said they’ve had similar experiences, some sharing their “safety rules” for meeting up for a first date.

“Please a guy tried to do this to me too. “A perfect spot, romantic views, has great wine.” It was the balcony of his apartment unit,” a commenter wrote.

“This is why I only accept restaurant reservations for all dates in the beginning. We shouldn’t do drink dates!!” another user said.

The Daily Dot reached out to Martin via TikTok comment.