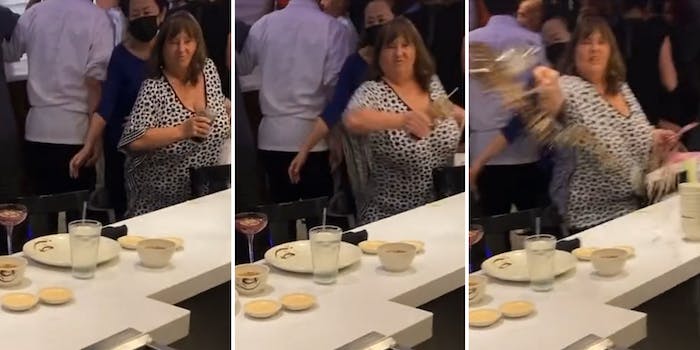 A viral video of a white woman throwing a drink across a hibachi grill at a group of Black college students has TikTok clamoring for answers.

@zariidaofficial was not expecting her video to blow up when she shared a 13-second clip of the incident, which went down at a restaurant in Atlanta, Georgia.

“Y’all me and my friends experienced a Karen the other day,” Zarii wrote.

The scene is chaotic, and all that’s really visible is an older white woman suddenly tossing a whole cup filled with liquid all the way across a communal restaurant setting before the camera goes shaky as the person recording moves away.

Still, the video racked up over 600,000 views, prompting Zarii to explain the situation a little further.

They were out at the restaurant for a friend’s birthday, she says in a subsequent TikTok, and one of the other people seated around the grill but not associated with her party was also celebrating her birthday. The restaurant staff accidentally brought Zarii’s friend’s cake to the other woman, who allegedly eagerly claimed it as her own.

“She knew damn well that wasn’t her fucking cake and…she still blew out the candles,” she recalls. “Who the fuck wants a blew out cake that you already put your germs on?”

Zarii says things gradually escalated, as Zarii and her friends felt that the other group was taunting them and making jokes about the cake even after they tried to get things settled, and eventually got to the point where she says the other birthday girl threw cake at them.

Throwing cake allegedly turned into throwing all sorts of things, which accounts for the chaos seen in the clip even prior to the drink being thrown. She also says the birthday girl’s father was calling them “ghetto [N-words].”

“Your daughter is the ghetto one, she’s getting up throwing cake in the restaurant,” Zarii tells viewers.

She also says the actual drink toss came out of nowhere by an older woman seated nearby, and someone in her group did toss a drink back at her but didn’t take it any further than that.

“I wouldn’t want nobody to punch my grandma,” she says.

The police were called, although it isn’t clear how exactly everything was resolved—but it was undoubtedly a birthday celebration to remember for both parties.

The Daily Dot has reached out to @zariidaofficial via TikTok comment.