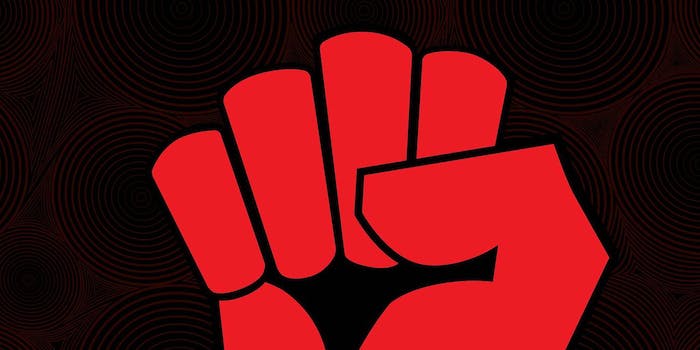 New ways of announcing your resistance to the great privacy problem are finally bubbling up.

Obama’s election was synonymous with the political slogan of hope and change: “Yes we can!” Unfortunately, that slogan took on a whole new meaning last week. “Yes, we can” has morphed into the ultimate surveillance botnet, conveniently outsourced to private companies like Google and Facebook. Government surveillance through private online mediums is now a reality.

With the advent Google Glass and lifelogging gadgets like Memoto—a wearable camera snapping a picture of your surroundings every 30 seconds—this reality is only getting more and more intrusive, more and more Orwellian. Soon, there will be no boundaries for what can be tracked and monitored. Both of these devices go further than almost any other privacy-invading technology on the market. Google Glass and Memoto users can record video or take stills without the subject being even remotely aware.

Take the Austrian programmers behind Data Dealer, an online game that turns the tables on the data collectors and brokers that profit from our connected lives. The game, one of the finalists for the Games for Change Award given out in New York later this week, illustrates the many ways in which companies already collect personally identifiable information and monetize it. Data Dealer (still in beta) lets you invest in online data collection practices, buy info from shady characters such a cash-strapped nurse, and re-sell it to willing customers like the CIA.

Play it, and you’re suddenly one of the bad guys. You’re gathering thousands of personal details from unsuspecting strangers who share too much online and offline: their relationship status, chronic illnesses, sexual orientation, height, diet and political attitude. As the data stash grows, so does your rising risk factor for ignoring privacy rules and concerns.

Wolfie Christl, one of the minds behind Data Dealer, told us that he thinks gamification is one of the best ways to get people riled up about their data being grabbed and resold. His team is about to roll out a full-featured multiplayer version, which will enable players to continuously look after their data empires.

“We plan to keep on integrating current events from real life into the game world, for example stories of new data leaks or changes in the privacy policies of Google, Facebook etc.,” Christl explains. “We see our game as a medium, facilitating a critical look at the role of personal data in the digital age. Basis for a protest movement? Gladly!”

Another interesting example of the growing backlash is Brooklyn programmer Federico Zannier. Zannier wants everybody to stalk him. He sells his private data—a total of 7GB or close to 45,000 files, organized in 71 folders—starting at a mere $2. The money goes a long way; you can scroll through his private life and to see what he’s read and typed, his photos, where he has pointed his mouse and of course his geolocation. Zannier’s visualizations are as beautiful as they are creepy.

Tagmenot takes this verboten principle into the legal domain, offering an opt-out service that gives you a way to object to appearing in pictures taken in public. You download a QR-code, and stick it on objects or yourself, to alert others that you don’t want any bits of your personal info linked to pictures. It’s not a binding ban, of course, but it makes a public and creative point of fighting technology with technology.

Google, meanwhile, skirts the issue. It has forbidden developers to build facial recognition into their Glass apps, but that’s about as effective as Sony trying to prevent third-party software for its Aibo robo-dogs. The difference is, the dogs were cute—while networked headgear tied into a mesh of giant databases brings us one step closer to ubiquitous surveillance.

What do we risk losing as humanity when tech companies develop intrusive gadgets and services just because they can and release them into the wild (with some symbolic restrictions in the form of a fig leaf disclaimer), and then sit back to let society or lawmakers deal with the unsavory consequences of omnipresent surveillance?

As more details about the NSA’s giant data vacuum cleaner come to light, you can only draw one conclusion. In the age of pervasive mobile communications and obsessive oversharing, the individual doesn’t stand the slightest chance of remaining private. What can be tapped and captured, will be, as the distinction between state surveillance and commercial tracking becomes utterly blurred and ultimately meaningless. We are seeing the beginnings of a privacy backlash—but it needs to be just that: the beginning.

Steffan Heuer and Pernille Tranberg are authors of the book Fake It: A Guide to Digital Self-Defense, just published in its second edition. They cover technology and privacy issues in San Francisco and Copenhagen. In this series, Digital self-defense, Heuer and Tranberg report with updates from the digital identity wars and teach us how to defend our privacy in the great data grab going on all around us. Follow them at @FakeIt_Book.