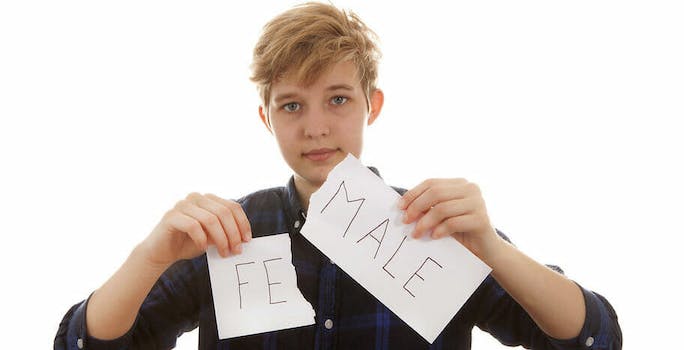 It's time to stop making assumptions.

You may have seen the terms floating around on social media, but perhaps the best way to define cisnormative behaviors or heteronormativity is by example.

Do you remember Chandler Bing’s father on Friends? Longtime fans may recall that the role was played by actress Kathleen Turner. Realistically, Chandler’s dad was presumably leading the life of a transgender woman. Throughout her stint on the show, Chandler and the rest of the cisgender gang constantly misgender Turner’s character, and she is referred to as a gay male drag queen rather than a woman.

In 2018, we may realize that on an interpersonal level these actions would be considered hurtful (or even violent) to a trans parent seeking acceptance from her child. But if we were to deconstruct why the Friends gang was incapable of understanding the gender of Chandler’s dad, what we’d find, at the heart of the matter, is cisnormativity.

Cisnormativity is the assumption that a person’s gender identity matches their biological sex, otherwise known as being “cisgender” or “cissexual.” This assumption often manifests itself in the form of misgendering, which occurs when a person is referred to by the incorrect pronouns or other gendered terms.

Cisnormativity is oftentimes unintentional on the individual level. But making incorrect assumptions about a person’s gender identity can be offensive and harmful. Most commonly, it happens to those in the trans community and can lead to the erasure of transness and genders that fall outside of the male-female binary, like genderqueer people and nonbinary people.

The concept of cisnormativity is closely tied to the theory of gender essentialism, in which there are certain innate biological or behavioral characteristics tied to gender. For example, cis women who cut their hair short and dress in a more traditionally masculine style can also be misgendered. It’s all about the common assumption that women-identifying people must exhibit a certain femme aesthetic.

Why is cisnormativity harmful?

Recently, it was reported that the U.S. Department of Health and Human Services was considering strictly defining gender “on a biological basis that is clear, grounded in science, objective and administrable.” A memo stated that “the sex listed on a person’s birth certificate, as originally issued, shall constitute definitive proof of a person’s sex unless rebutted by reliable genetic evidence,” according to the New York Times.

Trans and gender non-conforming activists have spoken out against the memo, saying that it will lead to increased violence against non-cis people and that the restrictive rhetoric is a form of transphobia and transmisogyny.

The Friends characters exhibited many signs of transphobia and transmisogyny in their handling of Chandler’s dad’s identity, but unfortunately, this was not their only misstep. They also expressed homophobic rhetoric. This is exemplified through their treatment of Ross’ ex-wife Carol, a lesbian. The root of this homophobia can be traced back to another deep-rooted concept in society: heteronormativity.

Heteronormativity is the widespread, dominant belief that heterosexuality is the norm. In other words, it’s the belief that sexual and romantic relationships must be between a man and a woman. Heteronormativity can manifest itself in many different ways, from something as innocent as presuming that a man and woman are romantically involved just because they are eating dinner together to more harmful effects like homophobia.

Many people can relate to the experience of familial pressure to marry, but this can be especially frustrating for people who do not identify as heterosexual. For instance, Tara Daniels, 31, identifies as queer and bisexual. “They know I’m queer,” she said about her parents, “but it’s not talked about, because I believe some of them are secretly hoping this is a phase and that I’ll settle down eventually with a nice man and be ‘normal.’”

This type of bi-erasure is another byproduct of heteronormativity. Photographer and entrepreneur Lydia Billings, a 27-year-old cis woman who identifies as queer and bisexual, says that because she is married to a man, the common assumption is that she is straight.

“My husband and I practice polyamory, and when I start dating a new male partner, he will often assume I’m straight simply because I’m on a date with him,” she said. Presumptions of heterosexuality erase more than bisexuality and homosexuality, it also ignores all other sexualities like asexuality and pansexuality.

A post shared by Lydia Billings Photography (@lydiabillingsphoto) on Nov 16, 2017 at 6:32am PST

Because of its pervasiveness, heteronormativity is often internalized even by people who identify as queer. “There have been many, many signs throughout my youth that I might experience attraction to women,” Sophie Stone wrote for Tearaway Magazine. “Signs I completely ignored, because I just assumed I must be straight.” And even when people are able to push past a cisnormative mindset, there can be assumptions of heterosexuality for trans men and women.

The intersection of heteronormativity and cisnormativity

While your instinct may be to assume that a femme-presenting trans woman is interested in men, trans women can have any sexuality.

Scout Silverstein, 31, who is trans, gender non-conforming and queer, says, “I still encounter people who ask me when I’m going to find a nice boy to settle down with.” This is regardless of the fact that Silverstein has had top surgery and takes testosterone.

However, Furay, a 31-year-old fabricator who identifies as non-binary and queer, makes the point that “because the default in society is being straight and cis, it’s no wonder that we emulate” these structures. “It’s almost impossible to escape that kind of construct,” they said.

“Even for queer folks in relationships, there is usually always a more femme- or more masc-presenting person,” Furay says.

How do gender and sexuality intersect with race?

Receptions of non-normative sexuality and gender identities also differ (and can be exacerbated) depending on one’s race. For example, Daniels says that within her Black community, there is a certain resistance to the acceptance of Black queerness.

“We’re already seen as inferior because of our race,” Daniel said. “People see being queer and/or trans as being inferior, so people try to demonize it. I’ve seen Black and brown folks claim that white people are the ones who started queerness, like it’s an effect of colonization.”

If you only talk about trans, intersex, non binary and/or gender non-comforting folks (etc) when a political administration is being violent: You are a part of the problem. I have to correct people all of the time in some of the most ordinary spaces to be inclusive of all genders. People who use cis heteronormative language and/or perpetuate the gender binary 364 days out of the year, in their classrooms, in their businesses, in the restaurant, in the airport, in the Lyft, when asking people to vote, in their activism, but then want to be mad at transphobic legislation. Divesting from the gender binary is FREE and can be done at anytime, anywhere. Love, a Trans man and Non- Binary Femme #endwhitesupremacy #divestfromthegenderbinary

Of course, just like heteronormativity and cisnormativity exist across the globe (and are not confined to America), queerness and gender nonconformity are also not restricted to American culture. There are also societies and cultures that recognize genders that fall outside the male-female dichotomy. For example, South Asia’s hijra, or “third gender,” people and Native Americans’ two-spirit identity.

For Furay, growing up in an Asian American household language played a big role. “My brother just had a niece, but my only options are ‘aunt’ or ‘uncle,’ and both those options don’t feel right to me.” However, one feature of spoken Mandarin Chinese that does work in their favor is that third-person pronouns are genderless. “I’m able to avoid falling into the binary of ‘him’ or ‘her’ in everyday conversations with some of my Taiwanese family members.”

How can we dismantle cisnormativity and heteronormativity within our own lives?

Multiple people we interviewed said that the first steps to dismantling cisnormativity and heteronormativity are to “ask questions” and “have a conversation,” rather than making assumptions. However, if you want to take your support for gender-nonconforming folks even further, Furay says that you can “proactively advocate for changing policy, such as IDNYC and gender ‘X’ on birth certificates, gender neutral bathrooms, and changing rooms.”

Bathroom policies have been one battleground that trans rights activists have had to fight in recent years. Because public bathrooms are historically gendered, these are areas of discomfort for trans and non-binary people.

“There are LGBTQIA+ communities in most cities, and a lot of spaces that hold trainings or gatherings for all people,” they said. “If you are raising a child, think critically and creatively about the pathways you take in playtime and other choices.”

Ultimately, the construction of gender identity begins as early as when babies are still in the womb. Because of the proliferation of cisnormativity and heteronormativity, children are often pushed toward one side of the gender binary before they are given an opportunity to choose. Think: gender reveal parties, dolls for girls, and action figures for boys.

Finally, deconstructing your own gender and sexuality can be a natural starting place. Daniels urges you to ask yourself some challenging questions: “Why do I desire this type of person? Have I ever felt like I was attracted physically, emotionally, spiritually to someone who isn’t the opposite gender? Are my preferences my own or have I been influenced in some way?”