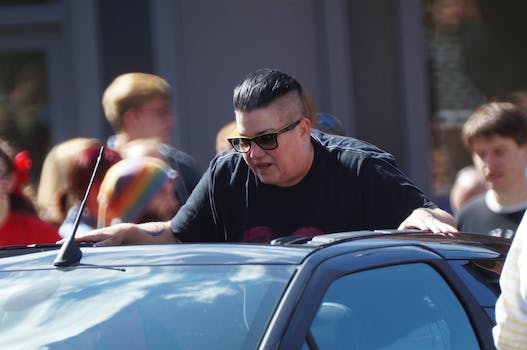 Ever wanted to stand up to that bigot on the train? Here are some tips to stepping up your game.

Lea DeLaria has zero time for your homophobic nonsense, even when it’s cloaked in dubious Biblical references. A video of the Orange is the New Black actress taking down a doom and gloom preacher in a subway car has gone viral this week, and watching her circle him, get up in his face, and quote the Bible right back at him is kind of oddly inspiring.

But it also raises an important question: How do we talk back to homophobes in public, whether they’re preachers spouting on street corners, street harassers sneering at gay couples, or people making nasty comments at the next table over in a restaurant? We’d all like to think that we’d rise to the occasion, but it can actually be surprisingly difficult to do, especially if we’re not prepared for it.

You never know when a homophobe will come out of nowhere and punch you in the gut, both literally and metaphorically, which is why you need to use extreme caution when engaging. While it would be nice to live in a world where we can talk back to bigotry without having to fear for our physical safety, unfortunately, we do not. That means that before you try to engage with someone, assess the situation. Are you alone? Is your opponent alone? How are people in the immediate area likely to react? Does the person appear intoxicated, belligerent, or just plain scary? It’s okay to put the fight away for another day.

2) Try to figure out where your opponent is coming from

Because you want to meet him on his own turf. DeLaria took on a preacher by throwing the Bible in his face, a tactic she was able to use because she knows the relevant sections of the text well and she was ready to take the fight over to his house. Once you find out what angle a homophobe is coming from, it’s a whole lot easier to take him on, and to shame him.

If someone is claiming homosexuality is unnatural, point to scads of peer-reviewed studies on homosexality in both humans and non-human animals (don’t use Wikipedia as a primary source, but take advantage of the numerous studies it links to). Someone who claims that children need a mother and a father needs a slap in the face with research on gay and lesbian parenting. Arguments about the institution of marriage can be met with research on comparative divorce rates; in fact, early statistical analysis suggests that in states where same-sex marriage is banned, divorce rates are higher overall than in states where it is legal.

You’ll need to do your research ahead of time so you’re prepared for any eventuality, and don’t be afraid to save statistics, links to studies, and related materials on your phone or tablet so you can pull them up quickly when you need them.

It’s really difficult to stay calm in the face of someone who is making homophobic comments, whether they’re about you, someone you love, or the gay community in general. However, such comments, and their framing, are often deliberately designed to be provocative. So be firm but implacable to get the upper hand. Make it clear that you’re not giving up, but also that your target homophobe won’t be getting a rise out of you.

Your body is one of your greatest tools in a confrontation. Keep your body language strong, assertive, and open, but not directly aggressive. Stand with your head up and your shoulders back, legs slightly spread and palms open. Try to avoid letting your shoulders creep up or slumping, both of which can make you seem less confident, and don’t cross your legs or arms or face your palms towards your body. If someone pushes into your personal space bubble, push back, gently, instead of backing away.

5) Come up with scripts ahead of time

Do you ever leave a situation feeling like it went horribly and come up with a snappy comeback four hours later? It’s a frustrating sensation, but it doesn’t have to be. Spend time coming up with possible scenarios and how you want to respond to them, right down to scripts for what you’ll say and how. Keep each script short and focused, and avoid using potential hot-button or dismissive words. No name-calling and no hyperbole; the simple facts and clarity of your speech are enough.

Even if you’ve prepared yourself mentally in every possible way, facing a homophobe in the wild is pretty different from reading over scientific research or even talking to yourself in the mirror. Call on your friends for some role playing in which you switch off; one of you gets to be the homophobe (sorry!) while the other talks back. Have the homophobes use the same kind of tactics you’ll encounter in real life: Aggressive namecalling, talking over you, speaking so quickly you can’t get a word in edgewise, trying to muster support from the crowd. Talk back. Get used to speaking firmly, stating your opinion, and not being intimidated.

7) Reserve the right to walk away from conversations

Sometimes you need to walk away because your train is leaving the platform, a conversation is clearly going nowhere, or a situation is clearly getting dangerous. You have the right to leave the conversation and the right to exercise it. Say “Thanks, I’m done talking to you” or “I don’t think this conversation is productive, I need to go” or just “this conversation is over,” and move on. If your opponent tries to physically or verbally pursue, repeat your statement and be firm, making sure to speak clearly and loudly enough for witnesses around you to hear. If he still doesn’t listen, say that you’re being harassed and ask someone around you for help; witnesses are often reluctant to do anything in a passive situation, but when they’re called upon for help, they’re more likely to step up.

Remember: It’s not your duty to confront every homophobe every time. Sometimes it’s too dangerous, there’s not enough time, or you don’t have the energy. You’re not a failure if you don’t bat 100 percent, and know that even if you don’t get through to an outspoken homophobe like that guy making lewd comments at the salad bar, you may be getting through to someone else in the room. You may also be inspiring someone who usually remains silent in such situations to speak up in the future; like this video, you can become the viral contagion of fighting back against hateful speech.

Photo via Stuart Grout/Flickr (CC BY 2.0)