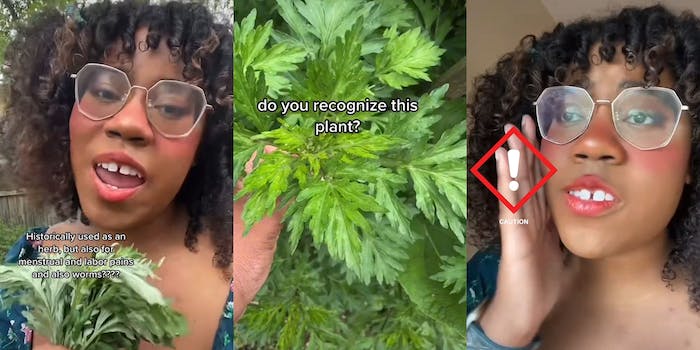 ‘Thank you for mentioning the risks’: TikTok foragers are warning viewers not to turn to plants for abortions in the wake of the Supreme Court draft leak

'Thank you for using your platform to speak about this.'

The recent news surrounding the potential overturning of Roe v. Wade, the Supreme Court decision that protects the legality of abortion, has many people worrying about the future of reproductive healthcare.

While the draft as written would leave laws regarding abortion up to individual states, a combination of trigger laws, laws banning abortion that would come into effect in the event that Roe v. Wade is overturned, and historic precedent in many states lead experts to believe that abortion rights are in danger in over 25 states.

Due to this, there is some public concern that people will seek alternative, unsafe methods to terminate pregnancies.

Among these people are plant experts. Throughout the world, herbal remedies have played a role in healthcare, specifically in regard to reproductive health. With a potential of an abortion ban on the horizon, some herbal health experts and practitioners are concerned that people will turn to herbal remedies to terminate a pregnancy. This, they say, could have disastrous consequences.

TikToker Alexis Nikole (@alexisnikole) is among the concerned. In a recent video posted to TikTok, Alexis showcased mugwort, a plant that she fears some may try to use to end a pregnancy. This, Alexis says, is a bad idea—and her video with over 1.1 million views explains why.

Lucid dreams!! History!! Mugwort!! Anger!! This video has ‘em all!

“In light of recent news, I’m really worried that people are going to start turning to our friends like mugwort, or parsley, or carrots to try and deal with a healthcare issue that our government has decided to stick its face into,” Alexis says in the video.

Historically, plants have been used to induce abortions. However, the use of plant abortifacients fell out of favor worldwide once safe medical abortions were developed, as using herbal remedies to terminate a pregnancy can be dangerous and, in some cases, deadly.

This is one of the many reasons why Alexis opted to warn TikTok about using plants to induce abortions.

“I am in no way advocating for the use of herbal abortions,” Alexis says. “That can be dangerous. It’s very easy to—one, have it not work, or two, to get incredibly sick from them.”

“But I also want people to acknowledge that making abortions illegal will not make fewer abortions happen,” she continues. “People with the means will travel to where it is legal—and a lot of those lawmakers have the means to travel to where it’s legal should they or someone in their family need that type of healthcare—but also, people who don’t have the means to go to where it’s legal will still and try and find a way. All it means is that abortions are going to be less safe.”

According to experts, this is true. A 2018 study by the Gutmacher Institute referenced by CNN noted that, while abortion rates were nearly equal in countries with strict limitations on abortion and those with fewer limitations, the rate of “unsafe” abortions was significantly higher in restrictive countries, with over 30% of abortions in those countries deemed “least safe.”

The same phenomenon occurs in the United States. According to a 2015 report from the Texas Policy Evaluation Project, as many as 240,000 people in Texas had attempted to self-induce an abortion at the time of the study, which the article chalks up to Texas’ notoriously strict abortion laws.

Near the end of the video, Alexis creates a tea using mugwort.

“This is mugwort green tea prepared in the traditional Chinese way,” she says. “When that tea is done pan-drying, I will drink it, and I will hope that I will dream of a world in which my body and all other bodies in this country that are capable of giving birth are no longer a battleground.”