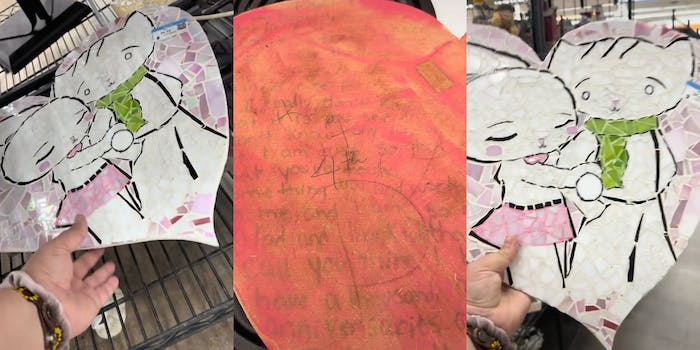 ‘It’s nice to find a relic of the past’: TikToker finds handmade gift she made 10 years ago for her ex-boyfriend at Goodwill

'On the flip side, you can now tell ppl that your artwork was for sale at a multimillion dollar store.'

“A friend and I are at a local Goodwill store and while walking by the shelves, we stumbled across this,” Kaylee Powell (@steamgeekcreations) says, picking up a stained glass heart with a drawing of what is presumed to be her and her then-boyfriend, the drawing from the animation, There She Is. Powell notes the piece of art is from 10 years ago and the back is painted pink, covering the love letter she wrote.

Powell ended up buying the artwork and embarks on a journey of removing the paint to unveil the love letter she wrote behind the piece. In the video, Powells removes a sticker and uses a spray in an attempt to remove the paint.

“I want to know what 16-year-old romantic ass Kaylee wrote to her stupid high school boyfriend,” she says. Eventually, after scraping the paint, the letter is revealed.

“’I honestly cannot believe that it’s only been a couple of weeks. The memories we have made, the mornings we’ve shared, and the love I’ve gained are priceless,’” she reads from the piece.

The letter continues, “I love you more than words can say and I hope it never changes. You’re my beacon of salvation, stars in my night sky, and my best friend. I love you.”

Powell admits she now found the artwork cringey yet funny. She says despite high school not being a great experience for her, the artwork was a reminder of her love for doing stained glass. Powell later shares that she and her ex-boyfriend were only together for three months.

The video has been viewed over 5.5 million times. Many people complimented the piece of art.

“On a side note, I think the piece is beautiful. I hope you’ve continued making art. if not, can I buy that?” one viewer asked.

“When you first showed it, I was like omg I would buy that too! when you said you made it tho like damn! great job,” another user wrote.

“Lowkey I would have purchased this if I saw it first it’s super cute,” a third commented.

The artwork even reminded people of high school.

“I love how romantic young people are. We were all that cringy if we had the chance. I don’t know about anyone else but I’ve gotten so bitter since,” one person said.

“Listening to that makes me glad I’m not a teenager anymore,” another one wrote.

“We were all teenage Kaylee at one point,” a third agreed.

In a follow-up video, Powell revealed that she bought the artwork at Goodwill for $4.49.