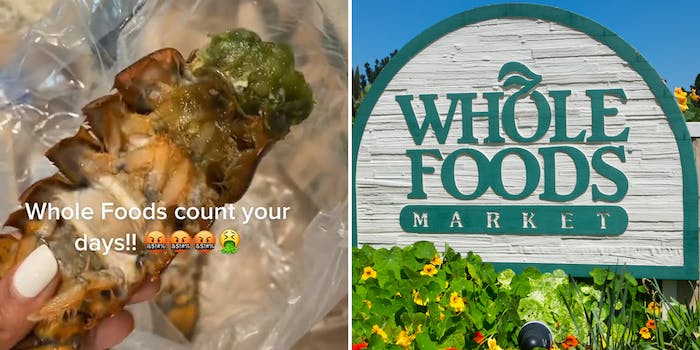 In a viral video, TikToker Brandi Cooper (@baddiebee100) shows her followers lobster covered in a green substance that she claims she purchased from an Atlanta location of Whole Foods.

The overlay text reads, “Whole Foods count your days!!”, accompanied by puking and angry emoji. She captioned the video, “I couldn’t even return it. I’m so mad.”

@baddiebee100 & I couldn’t even return it. I’m so mad 🤬🤬🤬🤬 #wholefoods #wholefoodsmarket #lobster #greenlobster #nasty #disgusting ♬ Wtf Is This? – TDLJaySav

The video has accumulated over 73,600 views since it was posted on June 7.

In the comments section, one user asked why Cooper couldn’t return the lobster. Cooper responded, saying “I didn’t have my receipt so I couldn’t return it even though there was a clear time stamp from the deli showing I had purchased it the day before.”

Other users asked, and shared their thoughts, on what the green substance is.

“It’s the tomalley. FDA says do not eat because of some recent shellfish issues on the east coast however, it is sometimes consumed,” one user said.

Tomalley is the soft green mass inside the body of a lobster, otherwise known as the digestive gland or a combination of the liver and pancreas. Commonly eaten as a delicacy in New England, tomalley can be riddled with toxins that cause Paralytic Shellfish Poisoning (PSP) and can lead to a lobster recall.

In 2008, the FDA stated that these toxins are potentially dangerous and that the coasts are constantly monitored for such toxins of a certain level. There are currently no lobster recalls in effect.

Some commenters say the substance is often found in lobster meat and encourage Cooper to “man up.”

“Lmao ever had a lobster before?? Completely normal,” another user commented.

“You damn lobster connoisseurs are killing me,” Cooper said in response to the comment. She continued, “It’s a 1st time for everything, and this was my 1st time seeing it along w/ other ppl in the comments”

The Daily Dot reached out to Cooper via TikTok comment and Whole Foods via email.