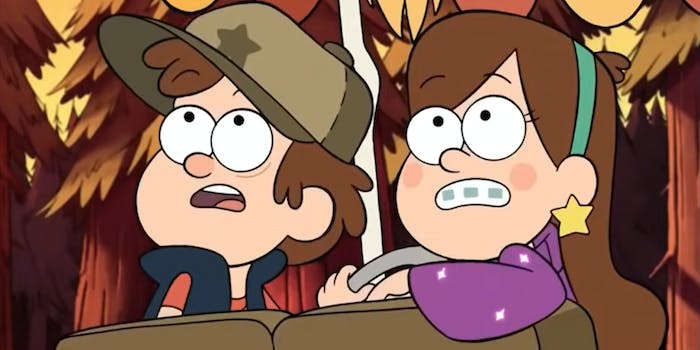 Alex Hirsch shares what he reportedly had to put up with when creating the show for Disney 10 years ago.

It’s been 10 years since twin siblings Dipper and Mabel Pines debuted their iconic one-liners-turned-memes on the Disney Channel. While Gravity Falls only ran for two seasons from 2012 to 2016, it developed a cult fanbase that continues to be referenced in pop culture today.

The show turned 10 years old on Wednesday, and “as a treat” Hirsch shared a tweet detailing “real emails” he received from the Disney TV Standards and Practices Department back when the show was airing. What made Gravity Falls such a great show is its clever humor and sharp writing. However, as many know, Disney cracks down on any and all humor that could lead to an angry parent ranting about it IRL. That includes any jokes that could go over kids’ heads but that adults would appreciate.

Since families are Disney’s core audience, they had no trouble sending Hirsch multiple notes asking him to remove or review certain jokes. Hirsch, as usual, pushed back on various exchanges, often straight up telling them how ridiculous the requests were. And fans were privy to these exchanges, thanks to Hirsch compiling them into one hilarious five-minute video on Wednesday.

As “one last treat” during the show’s 10-year anniversary celebration, Hirsch shared the tweet where he asked, “Ever curious about the fights I had with the censors on Gravity Falls?” he wrote.

“I probably shouldn’t share this butttt here are some REAL NOTES from DISNEY S&P and my REAL REPLIES,” he continued.

The notes included requests for revisions of terms like “hoo-ha” as Disney reportedly claimed it was a slang term for vagina, “chub pup” as Disney was adamant that it had a sexual connotation, and “holy Christmas”, as the conglomerate claimed it would be perceived as religiously offensive.

In one of the notes, the S&P department asked Hirsch to remove a character’s line about dressing up as a giant teddy bear. “It may call to mind the people who dress up as stuffed animals as a “furry” fetish,” they allegedly wrote.

To that, Hirsch replied, “Do I even have to respond to this?”

In another, he blatantly called Disney’s emails “the dumbest collection of notes [he’s] ever received.”

Hirsch lists more examples in a follow-up tweet, which includes a note from S&P asking Hirsch to remove the pipe from a horse’s mouth in a movie poster.

“Why? Is the concern that we’ll influence horses to smoke pipes?” he quipped.

Some of the notes also asked Hirsch to squash any homosexual subtleties that were portrayed on the show. It seemed progress was made near the end of the series as two male characters’ romantic relationship was eventually confirmed in the finale.

But this isn’t the first time Hirsch has publicly come at Disney executives. Last June, the creator quote-tweeted Disney’s Pride tweet where they wrote that “there’s room for everyone under the rainbow.”

While it seems Disney has come a long way with LGBTQ representation with shows like The Owl House, it seems many agree the company still has some catching up to do.

The Daily Dot reached out to Hirsch via Instagram message and Disney for comment on this story.