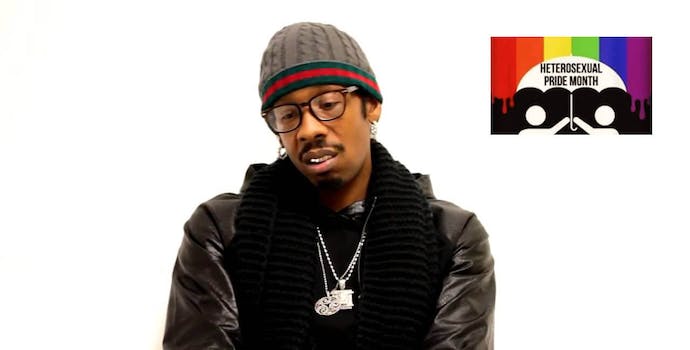 He's getting dragged online for the homophobic message.

The 46-year-old Atlanta musician captioned his post, “#MessageofThaDay With The Total Push of Other Ways Of Living…Let’s All Please Remember We All Come From This Right Here…No Disrespect 2 No One But Let’s Push This More N 2020 ..#Scripture #SouthernAllience Zagga.”

It is hard to believe that Gipp, born Cameron Gipp, was not meaning to be “disrespectful,” as the accompanying image itself is homophobic. It shows a heterosexual couple with a child between them holding an umbrella that shelters them from a downpour of rainbow paint. Acknowledging the rainbow as the power symbol for LGBTQ pride, this can only suggest heterosexuality must be shielded from some “alternative lifestyle”  onslaught.

The rapper is not alone in his thinking. Support for “straight pride” is often centered on religious objections to homosexuality, and is usually a push back to pride. Straight pride supporters also share the sentiment that heterosexuals do not flaunt their sexuality; making the LGBTQ movement about attention-seeking in their opinions, which is likewise homophobic.

Supporters of the  LGBTQ community shared their disappointment and found the post in bad taste. Many also believed it paralleled “all lives matter“-like talking points. It seems that Big Gipp is conveniently oblivious to the fact that marginalization and discrimination are what create the need for “pride” movements in the first place.

Heterosexuals are not discriminated against for being straight, but members of the LGBTQ community still face ongoing bigotry.  (Same-sex marriage has only been legally recognized for four years in the U.S.) This month the Hallmark Channel was even pressured by conservative groups into removing an advertisement featuring a lesbian wedding.

No apology has been issued from Gipp. Hopefully, he posts a more inclusive #MessageofThaDay next time.