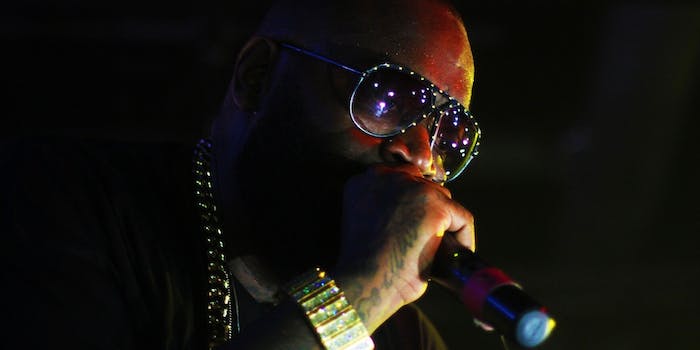 Did Rick Ross unfollow his daughter on Instagram over pregnancy?

Ross' daughter took to Instagram to deny the rumors.

Rumors have been swirling in the hip-hop community that rapper Rick Ross was so disappointed with the pregnancy of his 17-year-old daughter that he unfollowed her on Instagram.

Ross’ daughter, Toie Roberts, is rumored to be pregnant with her first child. Her mother, Lastonia Leviston, is the one who reportedly sparked the rumors, after posting a congratulations note to the teenager on Instagram Stories.

“Oh wait one more thing,” she allegedly wrote. “Congrats are in order to my prego’s baby,” before she reportedly shared a photo of Roberts with a baby bump.

It is then said that Ross was so upset and “embarrassed” over his daughter’s pregnancy that he unfollowed her on social media and deleted all photos of her on his Instagram page.

The internet caught wind of this rumor, and of course, went wild.

But his daughter quickly took to Instagram and shut down the rumors of her father’s disappointment. Roberts wrote on her Instagram Stories, “Y’all LIVE for ig & swear it’s real life. Y’all wouldn’t be nothing without. Still nothing but reasons why y’all take a unfollow to heart but us? Lol we never cared.”

She also added, “Y’all trying to put s**t together not knowing wtf going on. Y’all should be TIRED of smoking my d**k, I’m tired for y’all, damn.” Toie concluded her post by writing, “My parents, siblings and everybody else in my life rocking out with me right or WRONG, pregnant or NOT. I’m the PRINCESS I thought y’all knew.”

Ross himself has not confirmed or commented on the rumors, but that’s probably because he’s been busy with his press tour. The rapper just released his new memoir Hurricanes, where he recounts how years of drug abuse left him hospitalized for four days last year. In 2018, the rapper was left in the hospital after years of abusing drug, alcohol, and codeine–a prescription drug commonly used as cough and pain relief–left him with debilitating seizures.

He has since revealed that he is living a much healthier lifestyle, and no longer takes codeine, and has introduced more vegetables into his diet.

“I still believe in enjoying and living life,” Ross told People. “It’s a slow process, but I see the progress I’m making.”

Roberts appears to be more focused on her father than internet rumors.

The last thing she posted on her Instagram Stories read, “anywho, go watch my dad on good morning America. I’m so prada uuu.”