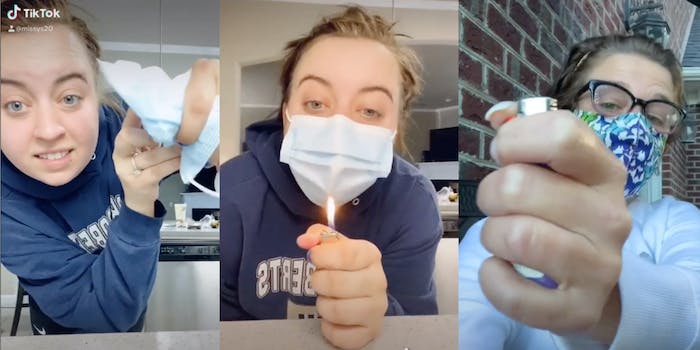 The anti-masker ended up deleting the video.

For whatever reason, an anti-masker keeps trying to make points about the uselessness of masks. And TikTok users keep shutting her down.

In one of her videos, the woman, who goes by the name “sarahjamison,” wears a disposable mask and blows out a lighter flame. Next, she wraps the mask, rather aggressively, around a spray bottle and sprays water through it. All this effort, it seems, to prove that mask-wearing is pointless.

The video is now being dueted and reacted to by TikTokers explaining the purpose of face masks during a pandemic that’s related to an airborne virus. Others are making fun of her exaggerated “sneeze” in a series of satirical videos.

One user, in particular, caught the internet’s attention with her duet of sarahjamison’s video. In missys20‘s duet, she proves that a lighter wouldn’t be blown out if one was practicing social distancing.

“Who the hell puts that much water droplets through a mask?” she adds. “How about you just be respectful and wear a mask like the businesses ask you to.”

The video has since been reposted to Twitter, where it also went viral. Missys20 was even given the moniker of “good Karen” by several users on TikTok.

“Now this is a good Karen,” one TikToker wrote, with another saying, “Coolest Karen out there.”

This sensible Karen also points out that face masks are preventative and not 100% effective. Her video has over 3.3 million likes.

Others have similarly made videos in response to the original.

“No one ever said it was f*cking airtight. … Jesus,” user witch_foot says in a reaction to the video. “You would suffocate, OK.”

For the record, the Centers for Disease Control and Prevention (CDC) recommends face masks based on numerous scientific studies that show they reduce the spray of droplets when worn over the nose and mouth.

Younger users are also responding with satirical videos of the original creator’s exaggerated attempt at recreating a sneeze with a full force spray bottle.

“This is a sneeze,” one user says with the spray of a water hose. Then with a soaking wet mask, she says, “Riddle me that Democrats.”

In a group effort to make fun of the anti-masker, similar parody videos of people with drenched masks continue to circulate online.

The video and all others from the original anti-masker on TikTok have since been deleted. A screenshot from Twitter of the user’s account shows she posted videos before deleting them, saying she is “done.”

“I deleted everything,” one of the posts reads. “I may not agree with some of you, but I never did this shit to you. I hope you’re all proud of your actions. My family is more important to me than any of this.”