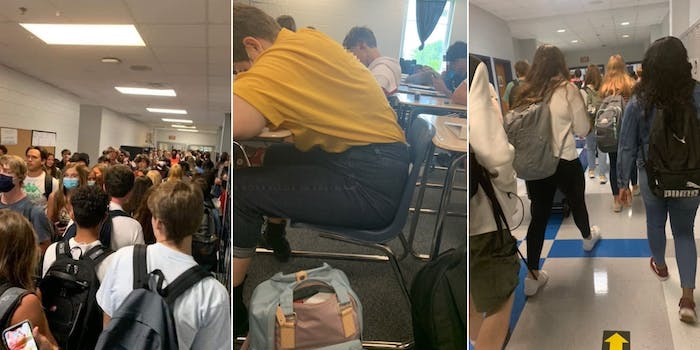 The viral photos showed crowded hallways and students without masks.

Update 11:45am CT, Aug. 10: Nine students and teachers at North Paulding High School in Georgia have tested positive for the coronavirus, according to CBS. This after viral images on social media showed crowded hallways. Read our original report below.

A series of harrowing images that went viral on Twitter shows the inside of a crowded Georgia high school that reopened amid the coronavirus pandemic. Now, the student who took the pictures has allegedly been suspended.

Twitter user @Freeyourmindkid shared photos of the inside of North Paulding High School, about an hour outside of Atlanta, on Tuesday and Wednesday. The photos, which have been retweeted tens of thousands of times, confirm many skeptics’ fears about reopening schools as COVID-19 cases surge throughout the United States. The photos show dozens of students clogging the hallways, standing shoulder-to-shoulder as they switch classes, with only a handful wearing masks.

Football players at the school reportedly tested positive for COVID-19 earlier this week.

On Wednesday, @Freeyourmindkid also tweeted, “I was just informed that the student who took these pictures from inside of the school has been suspended.” (The owner of the Twitter account did not immediately respond to the Daily Dot’s request for comment.)

North Paulding High School administrators are trying, to no avail, to limit the spread of these photos and squash concerns about social distancing. According to BuzzFeed, the school told one student’s mother that kids who didn’t show up “could face suspension or expulsion.”

@Freeyourmindkid also shared what they said was anonymous testimony from a Paulding County Schools teacher about how the district was operating. The teacher allegedly said the viral images accurately represented what was happening inside the schools and that students and faculty were both warned not to publicize the activity on social media. The teacher also corroborated BuzzFeed’s report that students could face suspensions for speaking out about the school on social media, and teachers could receive bad evaluations for voicing their concerns.

This teacher’s claims run contrary to a statement from Paulding Schools Superintendent Brian Otott that claimed that while the initial viral image from North Paulding High School “does not look good,” it lacked context. Otott further said that “wearing a mask is a personal choice and there is no practical way to enforce a mandate to wear them,” and that COVID-19 exposure occurs after “being within 6 feet of a sick person with COVID-19 for about 15 minutes.” Otott failed to mention that exposure also occurs through contact with an infected person’s bodily secretions via coughing, sneezing, talking, kissing, or sharing utensils.

Representatives for Paulding County Schools and North Paulding High School did not immediately respond to the Daily Dot’s request for comment.