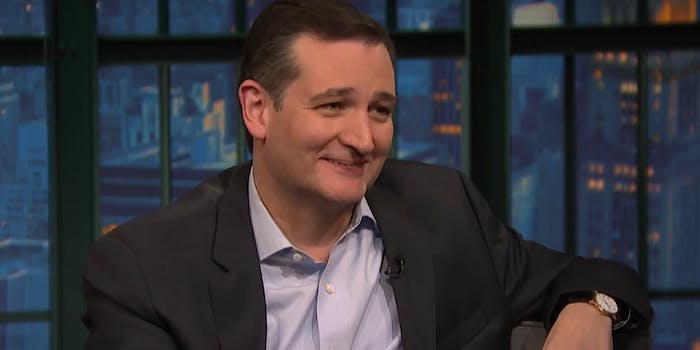 Did he just kill the meme?

People have been calling Sen. Ted Cruz (R-Texas) the Zodiac Killer for years. Apparently in the Halloween spirit, Cruz leaned into the conspiracy theory meme that’s often been used to mock him.

Cruz on Wednesday tweeted “Happy Halloween” along with an image of the infamous cryptogram that the Zodiac Killer sent to the San Francisco Chronicle in 1969.

The true identity of the killer, who killed five people in Northern California in the 1960s and 1970s, has never been discovered. As far back as 2013, people have been joking that it could be Cruz, even though he was born two years after the first killing. His wife once called the theory “a lot of garbage,” according to the Hill.

Some on Twitter weren’t so amused with Cruz’s apparent Halloween joke and condemned him for making light of a serial killer.

can't believe you would flippantly joke about a serial killer, Ted. Not cool!

For others, the joke just didn’t land in Cruz’s favor.

"what's up my fellow kids?? i heard y'all like memes, like how i'm supposedly the zodiac killer! hahaha xD, don't forget to vote for me!!" https://t.co/sHKYsTS4op

Cruz is now facing a tight re-election race against Texas Rep. Beto O’Rourke (D), which nonpartisan Cook Political Report is calling a “toss-up.” Campaign attacks from both sides have brought on old nicknames and memes.