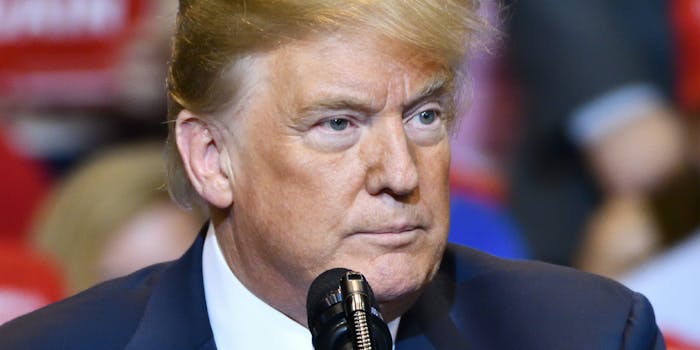 What does it mean to repeatedly call yourself a ‘nationalist?’

Can you be a nationalist and globalist at the same time?

This is not the first time the president has referred to himself as a nationalist. Last year, he told the Wall Street Journal, “Hey, I’m a nationalist and a globalist. I’m both.”

Calling yourself a globalist and a nationalist in the same sentence seems at odds on its face. However, in Trump’s interpretation of the words, it makes some sense. He is a nationalist because he promotes anti-immigration policies and privileges white Americans over both foreign nationals, immigrants, and people of color. He is a globalist in the sense that he has no problem with businesses chasing lower wages and higher profits abroad.

While these guiding principles are a part of “nationalism” and “globalism” respectively, these are only aspects of the broader terms which speak to concrete ideologies. Both globalism and nationalism are economic principles with accompanying political philosophies. It’s important to understand how economic principles can sometimes portray a broader sociocultural ideology.

What is nationalism? Nationalism vs. Globalism

The simplest way to understand nationalism is that it centers a country’s interests, culture, and sometimes race at the expense of others. This can express itself in varying degrees. Protectionist trade policies are nationalist because they priviledge a country’s goods or labor over others. On the extreme end of the spectrum, genocide is also a nationalistic policy because it absolutely priviledges the lives one group of citizens over another.

The wide variety of degrees in nationalist policy is also evident by looking at prominent nationalists in recent history. While Hitler was a nationalist, many less violent leaders defined themselves as nationalists. India’s prime minister Narendra Modi is a self-professed nationalist, but so is Hungary’s Victor Orban and Japan’s Shintaro Ishihara. All three politicians align to the right of their national politics, but gulfs exist between them in terms of policy and ideology. Britain’s recent Brexit referendum was a nationalist policy but so is Trump’s inhumane immigration policy.

Nationalism in the age of the Trump Administration

This phrase “white nationalism” helps us be more specific in describing nationalism under Trump, limiting the discussion to the racial aspects of nationalism rather than economic. While Trump campaigned both on economic and ethnic nationalism, he has left the economic aspect behind as president.

America’s culture is a culture of immigrants. Black, latinx, Asian-American and indigenous people are as much a part of American culture as white Anglo-Saxon Protestants. However, Trump, (and more broadly, the Republican Party) centers a white cultural tradition in its national identity. As we’ve seen from the militarization of ICE and the rise of the alt-right, nationalism becomes particularly dangerous when policies go beyond “prioritizing the state” and become associated with race.

Oftentimes, certain policies tend to marry nationalism with progressive economics. Unions, minimum wage laws, and tariffs have associations with “protectionism” or the practice of shielding a country’s domestic industries from foreign competition.

If patriotism is a love of country, then nationalism is the supremacy of country. In the case of Donald Trump and many other nationalists throughout history, this alludes to white supremacy.

When Alex Jones and other fringe far-right figures talk about globalism, they are talking about conspiracy theories that insist that world affairs are controlled by a small cabal of (often Jewish) elites. We will discuss globalism as a political philosophy not a conspiracy theory.

Where nationalism is commonly seen as both an economic policy and a larger ideology, globalist policies are generally economic. The idea behind globalism is that free trade and open borders will lead to a stronger world economy. Rather than looking at Alex Jones or Steve Bannon to define globalism, outlets like The Economist are better instances of the globalist point of view. Economic agreements like TPP and NAFTA are common examples of globalist policies.

Nationalists argue that the globalist economic policy can be deeply destabilizing to developing and developed economies. Critics of globalism point to low wages in third world countries and tax shelters like those outlined in the Panama Papers as symptoms of globalism. For example, if workers in countries with a robust minimum wage are competing for jobs with workers in a country without a minimum wage, it’s easy to see where protectionist policies come from. A common fear of globalism is a “race to the bottom” in which wages are suppressed and income inequality is exacerbated.

Globalists argue that regulating globalism is a better approach than adopting protectionist policies and forgoing the benefits that com from an interconnected economy. Globalism may bring lower wages, but it also brings lower manufacturing costs, which, the argument goes, bring cheaper products.

There are cultural ramifications to globalist economic policies. With the free exchange of goods and the open movement of citizens comes the free exchange of culture and the open movement of ideas. Organizations that work across international borders and multi-country organizations like the UN and UNICEF could also be considered globalist efforts. Globalist initiatives can be particularly appealing when it comes to issues like human rights and climate change.

While nationalism and globalism are not a “zero sum game,” it is important to monitor creeping nationalism. If ethnic nationalism takes hold in a country, then the policial realities could be absolute. However, as Saudi Arabia has proved, an interest in globalized economic principles doesn’t necessarily preculde human rights abuses.