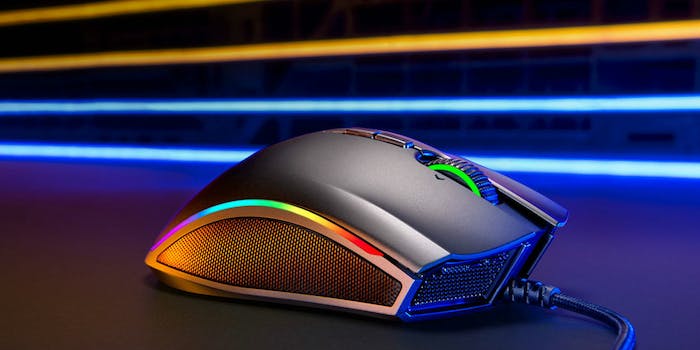 Cattuzzo has stated that she won’t apologize for fighting back against harassment.

The Brazilian branch of Razer, the video gaming accessory maker, has announced that it will terminate a contract with a female influencer over comments she made regarding sexual harassment that she received.

According to a TwitLonger post (first translated by Google and then later confirmed by a Portuguese speaker working with the Daily Dot) made by influencer Gabi Cattuzzo, the incident began when a comment made during a stream of hers from about two years ago recently went viral.

“Man is trash and those who are not, are exceptions,” Cattuzzo wrote in her post, referencing the comment from 2017. In her post, Cattuzzo goes on to explain that her original comment was made in response to a male follower lewdly commenting on her body.

“My intention with this phrase was: Whenever I put something in which I leave 1% of a gap to be made a bad joke, a lot of men go there and do it. 90% of the comments are usually made by men If you do not go there and make a joke, congratulations, you are the exception and I thank you for that,” Cattuzzo writes. “The intention was never to be [misandrist], much less to curse ALL the men (even because, I said that there were exceptions). Please understand: I post pictures every day, and every day most of the comments are offensive or sexualizing something that neither has how to be sexualized (sic). There are [a] few men who comment on interesting things or non-offensive comments here on Twitter (and for these people I am grateful, are the exceptions that save my day). I do not usually respond to the person when [they] put something offensive, I just ignore or block and I follow life. But in that case and on that day, I burst and made the unfortunate comment, which was interpreted even more unhappily by many.”

Cattuzzo continues by expressing additional regret over the comment, saying she personally apologized to an individual who posted a clip of her comment. On her Twitter account, Cattuzzo has stated that she won’t apologize for fighting back against harassment.

Translated via Google, the statement reads: “Referring to the past days’ occurrences, we would like to make it clear that the influencer Gabi Cattuzzo is not Razer’s spokesperson and has never been the brand’s ambassador.  She was part of a team of influences that were asked to advertise and use the products of the brand.”

The statement continues, alleging that Cattuzzo acted with prejudice against “gamers.”

“We are, since the beginning, as gamers, suffering all kinds of prejudice and stereotypes, and we’ll keep fighting so the situation doesn’t repeat itself,” Razer Brazil writes. “Razer Brazil reinforces that its  influencers’ opinions don’t represent or reflect, necessarily, the company’s opinions, which is completely against any type of discrimination be it sex, religion, political party or any type of intolerance and extremism. We’d like to inform that the influencer’s contract will expire shortly and will not be renewed.”

Razer Brazil is referencing the typical garden variety of stereotypes associated with gamers: That they’re fat, lazy, angry, and even bigoted in some cases. Of course, we know now (thanks to numerous, widely available studies) that “gamers” span the gamut from young to old, skinny to large, male to female, and near everything else. The video game community does, however, still grapple with rampant amounts of sexism, racism, and other forms of bigotry.

Enter “gamers” into Daily Dot’s search bar and you’ll find countless examples of Men Online acting as if their gamer identities are on the brink of extinction. There’s the time men reacted in numbers with the “gamers, rise up” meme to a gay esports champion proudly proclaiming he was gay. How about when some gamers got angry that Mortal Kombat 11’s Jax ended slavery in his story campaign? When r/Games voluntarily shut down to combat its own toxicity? Incidents of harassment veiled as “trolling?” “Vagina bones?” Boner Culture?” The list goes on.

Yes, the gaming community continues to struggle with all kinds of harassment and toxicity, much of it at the hands of men. And now a video game manufacturer is publicly shaming a woman for defending herself against sexual harassment.

Cattuzzo stated in a later tweet that she would be leaving social media for a few days because of the number of death threats made toward her and her family.

The gaming community reacted in force to the news, with moods swinging from disappointment to disgust. Some are tagging the general Razer brand account, and others are claiming they’ll only purchase products from Razer competitor Logitech.

Industry icon Cliff Bleszinski spoke publicly, too: “Your office in Brazil just openly defended a homophobic, misogynist streamer whose audience is harassing and threatening an ex-Razer Brand ambassador,” he wrote in a tweet addressed to Razer.

::Goes to see why Razer is trending:: pic.twitter.com/1FGxWJMdkW

@Razer Hi! Your office in Brazil just openly defended a homophobic, misogynistic streamer whose audience is openly harassing and threatening an ex-Razer Brazil brand ambassador. I wanted to check if you are aware of this and if you support this statement. https://t.co/3AWn7id0Ph

We’ve reached out to Razer.