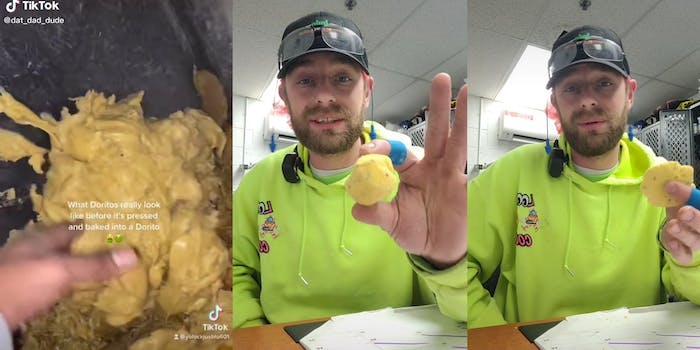 Frito-Lay worker shuts down TikToker who claimed they exposed Doritos

'Whatever that was, it just ain't true.'

In a viral TikTok video, a Frito-Lay worker shows what Doritos look like before they are cooked, shutting down a TikToker who claimed to expose them.

“I couldn’t show you anything more than opening doors and stuff because it’s kind of a big secret inside of there. Anyways, so what we have here is actually some masa,” user @dadoritodude says after using his badge to get through a series of doors.

His video was in response to a TikTok from user @yblockjusblo601, who claimed to show Doritos before they were cooked. While that TikToker showed a gelatinous substance that shakes when touched, the Frito-Lay employee says Doritos are made from masa, a dough made from corn.

“It’s kind of like Play-Doh, really, but it gets crushed in two rollers and then just cut into the shape you guys usually know. Then it gets baked and then fried and all kinds of stuff to make the regular Dorito,” he says.

The first TikToker made a follow-up video insisting that he’s a former Frito-Lay employee and that he took that video while working in the warehouse. However, user @dadoritodude claims the video is false.

“Whatever that was, it just ain’t true,” he says.

The Frito-Lay worker’s video received over 4.4 million views, with many users questioning why someone would allegedly lie about what goes into a product.

“It’s funny the people who make these ‘exposed’ videos act as if someone is lovingly hand crafting each item like it’s their mother cooking it,” one user said.

“Never get why so many people feel the need to lie about the food industry there’s a lot of shady activity sure, but not everyone is feeding us garbage,” another said.

“To be honest, we do everything very meticulously to make the perfect healthy product, everytime,” the TikToker responded.

Others praised the worker and tagged both Frito-Lay and Doritos to gain him recognition for dispelling this alleged myth.

“@Doritos give this guy a raise! I love Doritos even more now!” one user said.

“@fritolay this guy out here saving the brand!” another said.

One user noted that the original video included a small amount of product, uncommon for a factory. “I assumed it wasn’t real, that batch would be way way too small,” they said.

“ikr?? that would make like three 4.29 bags,” the TikToker responded.

The Daily Dot reached out to user @dadoritodude via a TikTok comment and Frito-Lay via email.