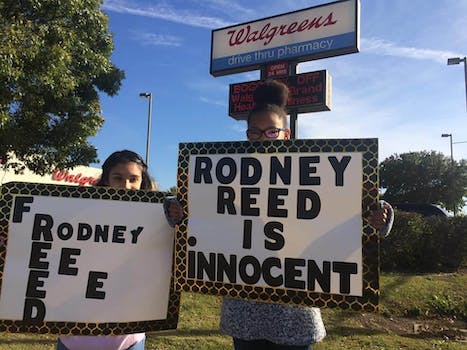 Kim Kardashian, Rihanna lead cry to #FreeRodneyReed ahead of execution

A petition to free him has more than a million signatures.

In 15 days, Texas is scheduled to execute a Black man who advocates say was wrongfully convicted in a 1996 murder, and celebrities are leading the charge to #FreeRodneyReed.

Rodney Reed, 51, has been serving in jail for more than 20 years for the rape and murder of 19-year-old Stacey Stites in Bastrop, Texas, according to Newsweek.

Reed was sentenced to death for Stites’ murder despite evidence against another suspect, Stites’ fiance Jimmy Fennell, according to Vox. According to his sworn affidavit, fellow gang member Arthur Snow claimed Fennell said he murdered Stites because she was sleeping with a Black man.

Fennell was a police officer who later served 10 years in prison for the kidnapping and sexual assault of a woman in his custody.

In the build-up to Reed’s execution date, social media has exploded with #FreeRodneyReed. Celebrities including Rihanna and T.I. are using the hashtag to call on their fans to show their support and sign a petition calling for the execution of Reed to be halted.

One Click!!! SIGN this petition if you don’t believe the Government should kill an innocent man!!! @GovAbbott https://t.co/L3xrvn7MJO

On Tuesday afternoon, the target number of signatures for the petition was expanded to 2 million after it gained more than a million signatures in a day.

I just signed this petition to tell @GovAbbott to stop the execution of Rodney Reed. You should too! #FreeRodneyReed https://t.co/yvA56GrNkM

I just signed this petition to tell @GovAbbott to stop the execution of Rodney Reed. You should too!!!#FreeRodneyReedhttps://t.co/HGwLatcE7S

I just signed this petition to tell @GovAbbott to stop the execution of Rodney Reed. You can too! #FreeRodneyReed https://t.co/ELQ3MYq1RG

16 days left and he will be executed for a crime he didn’t commit .. get more info here! #freerodneyreed https://t.co/Njm7QsTNtx pic.twitter.com/ifSGk6ssqg

Kim Kardashian spoke with Reed last week and said she is “working tirelessly” to get halt his execution, TMZ reported on Monday.

PLEASE @GovAbbott How can you execute a man when since his trial, substantial evidence that would exonerate Rodney Reed has come forward and even implicates the other person of interest. I URGE YOU TO DO THE RIGHT THING.

On Friday, the European Union shared a statement condemning the upcoming execution and called on Texas Gov. Greg Abbott to halt it.

The European Union regrets that the State of Texas plans to execute Mr. Rodney Reed on November 20th and makes an urgent appeal to @GovAbbott for clemency on his behalf. Evidence in Mr. Reed's case casts substantial doubt as to his culpability. #EndCapitalPunishment @RDunhamDPIC pic.twitter.com/Nt7w0IPKKQ

“Evidence of Mr. Reed’s case casts substantial doubt as to his culpability,” the statement said. “Mr. Reed is seeking DNA testing of evidence that has not been previously tested. Under these circumstances, we believe the state should not proceed with the execution without allowing for those tests.”

One of the numerous events scheduled to raise awareness about the issue and show Rodney the public’s support is “Call Rodney & Say ‘Hello,”” which allows callers to leave a message for Rodney with Houston radio station KKHT.

A Facebook page called “Rodney Reed Is Innocent” announced on Tuesday morning that a bipartisan group of 26 lawmakers has also asked Abbott to stop the execution.

Posted by Rodney Reed is Innocent on Tuesday, November 5, 2019

“We’re grateful for the increased interest in Rodney’s case, and we hope Governor Abbott will respond favorably to the letter he received today from 26 bipartisan Texas lawmakers urging him to stop the execution,” Tiffany McMillan, who started the page, told the Daily Dot.

“Our goal everyday is to educate others so they feel empowered and inspired to act in a meaningful way for Rodney,” McMillan added.

Democratic presidential candidate Julián Castro also called on Abbott to put a stay on the execution.

The death penalty is not only immoral—too often people are wrongly convicted.

Compelling evidence shows that Rodney Reed, a Black man convicted by an all-White jury, may not have committed the crime.@GovAbbott needs to halt his execution.https://t.co/B5ON5KZv8n

On social media, countless others posted throughout the week with the hashtag #FreeRodneyReed.

Rodney Reed will be MURDERED by the state of Texas in 15 days & @GovAbbott has yet to say anything. Governor you have to power to stop this wrongful execution why are you choosing to remain silent? #FreeRodneyReed #RodneyReed

Sandra Reed holds a poster board proclaiming her son's innocence. Death Row inmate Rodney Reed was back in Bastrop County District Court to ask the judge to reconsider previous testimony in his murder conviction for the death of Stacey Stites. #texasdeathrow #rodneyreed #bastropcounty #staceystites

16 days before an innocent man is executed for a crime he didn't commit. Take action here https://t.co/9Ju7jGHZG7 #freerodneyreed https://t.co/idfIGriyEe

Abbott’s social media accounts have been flooded with comments from protesters. The Daily Dot was unable to reach his office on Tuesday afternoon.