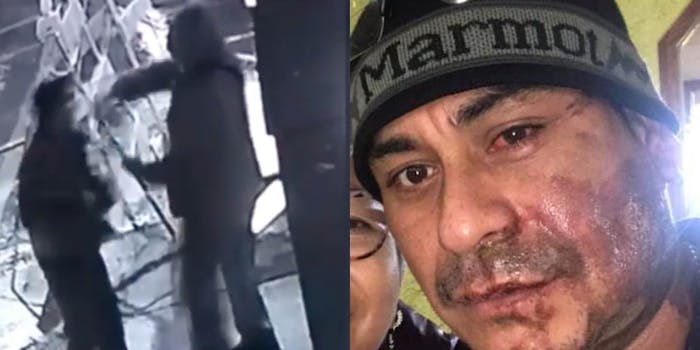 It started with a parking dispute.

A Wisconsin man said he was doused with battery acid on Friday night over a parking dispute that escalated to a racist attack, according to WISN.

Mahud Villalaz, 42, told WISN that the incident turned violent after a 62-year-old man called him “illegal.”

According to a description posted by his sister Priscilla Villalaz on GoFundMe, Villalaz parked outside a Mexican restaurant in Milwaukee when the attacker approached him and told him he couldn’t park there.

That’s when Villalaz noticed a sign saying he wasn’t allowed to park there, so he moved his vehicle down the street.

Villalaz told WISN that even after he moved his truck following the argument, he saw the attacker on his way to the restaurant, waiting with a bottle.

“You guys come here and don’t obey my laws. You and your people are invading my country,” the man screamed, according to Villalaz.

“I think I pissed him off because I told him, ‘This is my country. This isn’t your country. Everybody came from somewhere else here,'” Villalaz told WISN. That’s when the man threw the acid on his face, he said.

Villalaz said he wanted to fight back, but couldn’t because he couldn’t open his eyes.

The attack was captured on video in a security camera nearby and has since been released by WISN.

The footage shows Villalaz in conversation with a man in a hoodie. The attacker, who Villalaz identified as white, at one point raises his finger during the conversation before splashing something on Villalaz’s face.

Villalaz immediately covers his face while the attacker watches.

“I believe [I] am a victim of a hate crime because [of] how he approached me telling me to ‘get out this country,'” Villalaz told WISN.

“Today, my brother can’t see with his left eye and half of his face is burned. We know the hospital bills will soon be coming from the care he received,” his sister wrote on the GoFundMe page.

#UPDATE: Alleged Milwaukee #AcidAttack I just spoke to the victim’s family, they say he was leaving Mexican restaurant…

Milwaukee Alderman José G. Pérez released a statement on Saturday calling it the incident an act of “senseless violence.”

The GoFundMe set up for Villalaz has raised more than $19,000 in less than 24 hours, passing the initial goal of $15,000. The attacker has reportedly been arrested. The Daily Dot has reached out to Mahud and Priscilla Villalaz.